There’s nothing real about reality TV.

Seventeen-year-old Bonnie™ Baker has grown up on TV—she and her twelve siblings are the stars of one-time hit reality show Baker’s Dozen. Since the show’s cancellation and the scandal surrounding it, Bonnie™ has tried to live a normal life, under the radar and out of the spotlight. But it’s about to fall apart…because Baker’s Dozen is going back on the air. Bonnie™’s mom and the show’s producers won’t let her quit and soon the life she has so carefully built for herself, with real friends (and maybe even a real boyfriend), is in danger of being destroyed by the show. Bonnie™ needs to do something drastic if her life is ever going to be her own—even if it means being more exposed than ever before.

Man, this book was brutal on my heart.  Bonnie was a very strong character and had to make some pretty painful decisions in Something Real.  Where did her character come from- was there an inspiration?

Like any character in a book, Bonnie™ came from a lot of places. Her desire to go out and see the world is definitely a part of me that I gave to her, although it’s very much something that’s true to Bonnie™--she’s dying to get away from the crazymaking family she has. My main inspiration was the show Jon and Kate Plus Eight. I basically just imagined Bonnie™ was part of a similar family, then followed some logical conclusions. But really, characters take on a mind of their own. Bonnie™ definitely told me who she was and what she wanted.

While reading this book, I found myself wondering if shows like Jon and Kate plus Eight, The Duggars, or any of the other reality shows that have kids were similar to this book.  What research went into writing a book like this?  I am sure it wasn't reading history books!

No, the history is far too near, unfortunately! I watched some of Jon and Kate and I read the Duggars’ blog. I also read lots of pop culture references to these families—Perez Hilton, People magazine. One thing that was really helpful in constructing Beth Baker-Miller (Bonnie™’s mom) was watching the movie Cinema Verite, which is an HBO movie about the first reality TV family (the Louds). It was fascinating to read Pat Loud’s biography—having cameras in your house back then was unheard of and the show affected the family in significant ways. It was so weird, because she had no cultural reference for this; no one had done reality TV before, not like that, anyway.

You hit on a few very tough topics in Something Real- abuse/ neglect, drinking, suicide, depression, and coming out.  Did you plan on hitting so many serious topics when you originally conceived the idea for Something Real?

I knew that serious issues would come up because of the story’s premise, but I wasn’t exactly sure what those things would be. Once I got to know my characters, they sort of told me what they were dealing with and I ran with it. What’s really cool is that these issues are all things I care about and the book gave me a chance to explore them further. I think this is what people mean when they say “write what you know”—as in, write about your passions, your obsessions, and your personal landscape.

To go a little lighter, Bonnie wants to travel- I know that you are also a traveler.  Bonnie has posters of places from all over the world on the walls of her room, so what pictures would be on your walls?  (Please feel free to share the actual pictures if you would like.)

There are pictures all over my house of places my husband and I have traveled to. Most recently, I took a trip to Morocco to do research for my YA fantasy trilogy that is coming out in October 2014. I wrote a blog post about it, if you want to check it out. Some of these photos—especially the ones from the Sahara—will be going up in my office. I also have a section of my website that I call my “Inspiration Gallery”. It’s where I put up travel photos that inspire me. Seeing my travel photos reminds me of all the ways that traveling has fed me creatively. The world is bursting with stories and you learn so much about yourself and what it means to be human when you go exploring.

From what I have read from Goodreads- you have quite a list of books coming out in the next few years. Can you share a little bit about them?

I’m really excited because they’re all so different. The next one is called EXQUISITE CAPTIVE and it’s about a jinni who is trafficked in a bottle and sold to a human master. It’s the first in a trilogy coming out from HarperCollins. The first book is all about being enslaved and getting free—it takes place in Los Angeles, where I’m originally from. The second, DARK PASSAGE (Fall 2015), takes place in Morocco, and the third, FREEDOM’S SLAVE (Fall 2016) happens in the jinn realm. So it’s a fun mix of urban and high fantasy, with romance, revolution, and the delicious drama that makes fantasy so fun. There are so few books about the jinn and it was really exciting to get into the lore and then make it my own. I think jinn are in the air now, though: Aladdin is going to be on Broadway starting next month!

My fifth book, which comes out in Winter 2014 from Macmillan, is another YA realism. This one takes place in a small California town, with a young Marine who has just returned from Afghanistan and a girl he knew in high school. It’s a romance, but it’s gritty and deals with some pretty tough issues. This book is very close to my heart and I can’t wait to share it with readers. The title is still up in the air, but on my website it’s called A GEOGRAPHY OF US. That’ll change soon.

Based on your blog, you have had a very busy 2013!  What was the best thing that happened to you last year and what are you looking forward to in 2014?

I loved 2013, even though it was a kick in the butt in many ways. I guess my favorite thing was selling my jinni trilogy—that was a total dream come true and the crew over at HarperCollins continually blow me away. But I also got another dream come true because I moved to NYC, which I’ve wanted to do for about a million and a half years. In 2014, I’m looking forward to my first two books coming out…I have to cheat again and add one more thing: I’m getting my MFA in Writing for Children and Young Adults from Vermont College of Fine Arts in July—I’m so psyched! It’s an amazing program. 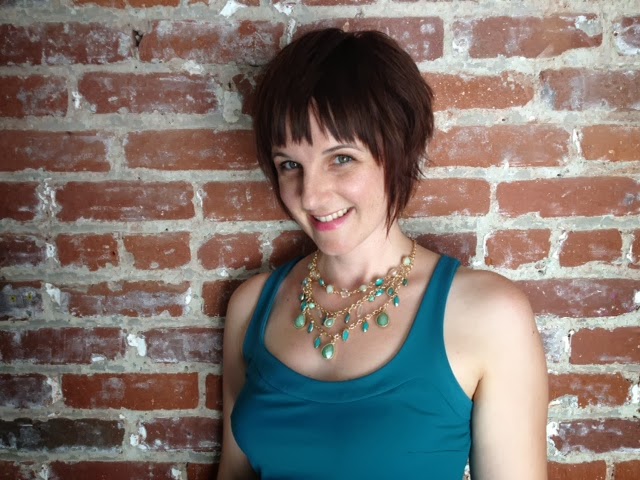 Heather Demetrios, originally from Los Angeles, now lives in Brooklyn and various imaginary locales. She is the recipient of a PEN New England Discovery Award for her debut YA novel about reality TV “stardom,” SOMETHING REAL (Macmillan/Henry Holt), and is the author of the upcoming EXQUISITE CAPTIVE, a smoldering fantasy about jinn in Los Angeles (#1 in the DARK CARAVAN fantasy trilogy from HarperCollins/Balzer+Bray), both out in 2014. She is currently working on her second novel for Macmillan, a love story about a young combat veteran and a girl trapped in their small town, both struggling to escape the war at home. When she’s not hanging out with her characters, Heather is working on her MFA in writing for children and young adults at Vermont College of Fine Arts.

Enter below to win a copy of Something Real from the very generous publisher!  US/ CA only please 13+ only please!