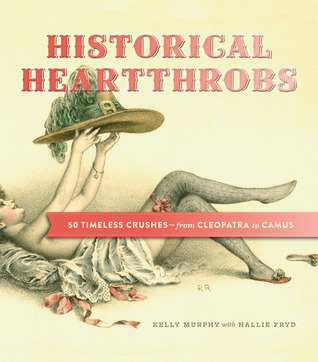 This book compiles photos and life stories of 50 of the sexiest men and women from history and asks the essential question: Would you really want to date them? Some are artists, some are scientists, and many are political or military leaders, but all have had a lasting impact on human life—and a sizable impact on their admirers as well. Each entry describes the period in which the heartthrob lived and includes essential stats, hilarious sidebars, and, of course, a “crushability” ranking: a measurement of how crush-worthy these people really are, based on their relative levels of heroism (or villainy).

This book is basically the Buzzfeed or Upworthy of books.  I can see the article titles now.  Fifty hot people from history who are going to rock your world!  or These fifty historical figures are going to change your life for the better! or Move over, Jennifer Lawrence, these fifty timeless crushes would have won the internet if it had been invented yet.  It is clickbait in paper form.

The summary describes what you get here -- a few pages each on fifty historical figure -- what they accomplished, why they're notable, oh, and how sexy they are.  I knew exactly what I was going to get, but I still found myself rolling my eyes a lot.  Do I really care about someone's cheekbones or beautiful hair or stylishness more than I care about the difference they made in the world?  Is it really necessary to talk about someone's sex life? What about historical figures who don't fit our traditional definitions of beauty?  They're not going to get their own book, are they?

Okay, whatever. I can't rightfully be annoyed about something I knew going into the book.

So, here's the good thing: this book does a great job of compiling a list of historical figures from throughout time, from all over the world, and it's not just a list of straight white men who have made a difference.  There's representation of individuals from many different ethnicities, genders, sexual orientations, etc.  Contributions to art, science, technology, politics, activism, etc., are recognized.  There were a lot of people included who I knew very little about, so it was nice to be introduced to some new people to learn about.

The book keeps it fairly lighthearted, so don't expect much critical analysis of the more controversial picks in here.  That can be a good thing if you're just looking for a funny, fluffy read, but that doesn't make it not problematic, either.  For example, Leni Riefenstahl might have been beautiful and a great filmmaker, but she created Nazi propaganda.  The book doesn't really try to defend her, but it doesn't go out of its way to write a clear condemnation, either.  There were harsher writeups for people who were unfaithful to their spouses than to someone who willingly made films glorifying the Nazi regime.

Historical Heartthrobs is a fun book to pick up and read a few pages at a time, so long as you can contain your annoyance over the fact that we're reducing world-changers to if they were hot or not.  You might learn something, once you stop rolling your eyes (if you're anything like me, that is).
non-fiction