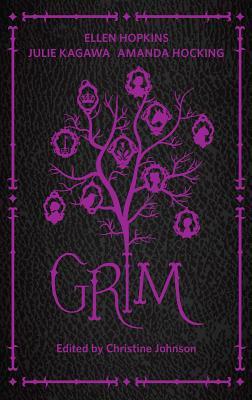 Inspired by classic fairy tales, but with a dark and sinister twist, Grim contains short stories from some of the best voices in young adult literature today.


Grim is a pretty excellent collection of fairy tale-inspired stories from top YA authors.  While the blurb bills them all as dark and sinister, I don't think that's necessarily true.  There are some that are kind of creepy, and a few with sinister plot twists, but I didn't find the collection to be overall quite as, uh, grim as advertised. I do wish that the stories included notes from the authors about their inspirations or what fairy tales they were adapting, since I'm not really familiar with too many fairy tales, but otherwise, I enjoyed a good number of these stories and think this one is definitely worth picking up.

Here are my quick thoughts on each of the stories in the collection.

The Key, by Rachel Hawkins: Short and not-so-sweet, Hawkins works a lot of twists and surprises that I didn't see coming into this story about the daughter of a small-town psychic in a trailer park.  This was a great way to kick off the collection of stories.

Figment, by Jeri Smith-Ready: A teenager inherits something from his absentee father that changes his life, whether he likes it or not.  A cute, bittersweet story with a brief epilogue that actually worked and served a purpose and made me happy again.  As someone who really has a lot of sentimental attachments to inanimate objects, this story resonated with me.

The Twelfth Girl, by Malinda Lo: I'd love to see a whole book set in the world of this story, which takes place part on the campus of a pricey private school, and part, well, somewhere else.  Definitely the kind of story that left me wanting to know more about the characters and what happened next.

The Raven Princess, by Jon Skovron: So far, this story is the closest to a traditional fairy tale, with a lonely, cursed princess and a young man who sets out to break the curse.  There are some unexpected twists though, as things are not always as they seem.  There's a great lesson to be learned from this one, for the hero's quest.  It's another bittersweet story, though -- are they all going to be like this?

Thinner Than Water, by Saundra Mitchell: First, a huge content warning on this one for incest and child abuse.  We learn from the very first lines of this story that the king comes to his daughter's bedchambers at night, and now he wishes to marry her and make her his new queen.  While nothing is described graphically, you know what is happening and it can be tough to read.  But this beautifully written story is about a survivor, and the princess takes matters into her own hands to bring an end to her father's abuse.  The subject matter is tough, but the princess is triumphant.

Before the Rose Bloomed, by Ellen Hopkins:  This story, a retelling of The Snow Queen, is written in verse, which I always tend to have a bit of a rocky relationship with.  It had its cute and compelling moments but overall wasn't for me.  Mostly I was just sort of bored, and found it predictable.  Your mileage may vary, of course.

Beast/Beast, by Tessa Gratton: I thought this was well written but I don't know that it added much to the Beauty and the Beast story that we all already know.  It's written from "Beauty's" perspective, and her journey to understand the curse that both she and the Beast are subject to is compelling.  I think I just wanted a little something more than I ultimately got.

The Brothers Piggett, by Julie Kagawa: This one, as you might guess, is a take on the Three Little Pigs.  I enjoy just about everything Julie Kagawa writes and this is no exception.  I kind of wondered where this was going for a while -- the main character edges a bit close to "nice guy" territory, you know, thinking a girl should like him just because he's nice to her and therefore better than any other guy out there -- but ultimately the ending of the story sold me on it.

Untethered, by Sonia Gensler: A simple ghost story with a twist that I should have saw coming but didn't.  I actually went oh! out loud when all the pieces of the story clicked into place for me.

Better, by Shaun David Hutchinson: This one did not go where I was expecting, and I loved it for that.  It combines space travel, mysterious diseases, the morality and ethics behind artificial intelligence, perhaps cloning, and medical research, and young love, and gets real sinister, real fast.  Content warning on this one, a character is sexually assaulted, although nothing is depicted on the page.

Light It Up, by Kimberly Derting:  This one is awesome! I don't want to give away the fairy tale that this one is based on, even if you can guess it fairly quickly, but it's an awesome updated take on a familiar story, and features a badass, resourceful girl as the main/POV character.

Sharper Than a Serpent's Tongue, by Christine Johnson: This story was kind of a hot mess.  The storyline hinges on a mom who is an alcoholic, and a creepy dude who stops just shy of assaulting one of our main characters, and a person who makes excuses for him and demands silence from the girl he tried to harm.  It just didn't work for me.

A Real Boy, by Claudia Gray: A look at robots, artificial intelligence, and love in the future.  Definitely another one that I wanted more from when it was over.  It's a sweet story that raises questions about what it means to be human.

Skin Trade, by Myra McEntire: From the very beginning, I was hooked, wanting to know what exactly was going on.  I didn't entirely understand the mythology behind this one, but it was super creepy and tense and kind of gory - just my style!

Beauty and the Chad, by Sarah Rees Brennan: If we want to talk about a fresh new take on Beauty and the Beast, let's talk about this story.  Aside from the trademark snark and banter I've come to expect from Sarah Rees Brennan, there are also some interesting things in there about gender presentation and expected gender roles and bravery and falling in love with someone unexpected.

The Pink: A Grimm Story, by Amanda Hocking: A tale told fairly simply, we start out with a queen who is saddened that she has not yet been able to have a child.  Each short chapter jumps forward in time to tell the rest of the story.  I didn't love this one, it felt a little like a much longer story that was edited down to be a short story instead.

Sell Out, by Jackson Pearce: Another one that I really wanted more from! There's a lot that you could do with the scenario Pearce writes about.  This one really has great potential to be a much longer story, because I feel like the ending we got was really just the beginning of the story of these characters.
fairy tale retellings short stories