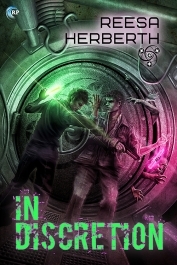 Thanson Nez thought his career as a Discretionary would take him to the stars, not strand him on a space station at the ass-end of the Empire. Thanks to his last client, he’s carrying a secret he can’t get rid of fast enough, but his oath to the guild means a swift, painful death if he shares it. Already desperate for help, he runs into yet more trouble: his ex, and an explosion that paralyzes the station moments after their uncomfortable reunion.

Kazra Ferdow, Station 43’s communications officer, is almost as blindsided by the return of his first love as he is by the sudden loss of power and life support. The station is a floating graveyard in the making, and something is turning its inhabitants into savage killers. Fighting human monsters and damaged tech, Kazra and Thanson must put aside their past long enough to try to save everyone.

The more light they shine into dark corners, the more Thanson realizes how many people might die for the secrets locked in his head—and what he’s willing to sacrifice to make sure Kazra isn’t one of them.

In Discretion takes place in deep space and is part of a larger series/universe of books, although it stands on its own well enough.  Our main character, Thanson, is a Discretionary, which is kind of like a cross between an escort and a secret keeper.  You can imagine that he's heard all sorts of things, so the fact that something has spooked him enough to abandon his job at the beginning of the book means that something big is going to go down.

Things get complicated when Thanson finds his ex, Kazra, on the space station he's stuck on.  Their backstory comes out slowly -- starting off, all you know is that they separated under less than wonderful circumstances.  Their reunion was kind of bittersweet, because neither of them think that they've got a chance to patch things back up -- their lives are very different now, and besides, their lives are in danger, thanks to Thanson's secrets.  I had mixed feelings about not knowing all of their backstory at first, because it really felt like I had started reading in the middle of a book, like I was expected to know already what broke Thanson and Kazra up.  The slow reveal worked, though, and the moments where both men let their guard down to tell the truth behind their parting were really effective and emotional.

In Discretion is only about 100 pages long, and things move along at a pretty fast clip.  Sometimes things felt like they moved too fast, though.  Maybe it's just me, but I kept getting confused as to why things were happening or where the characters were, and I feel like if maybe a little more time had been given to establishing scenes and character motivations, it would have been less of a bumpy ride.  Like I mentioned, the book can be read as a stand-alone, although I'd be interested to check out the rest of the universe to better put this one in context.
LGBT Science Fiction