By Sarah A. - January 28, 2014
Thanks to TLC Book Tours, we're pleased to present a review for The Fixer, a new thriller by T.E. Woods. Make sure to check out the rest of the tour stops to see other reviews! 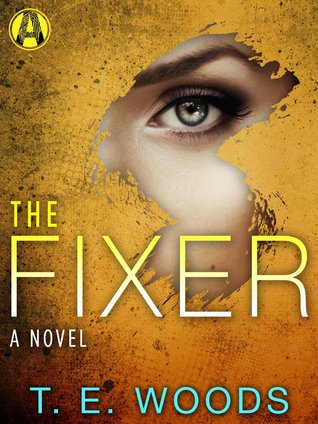 T. E. Woods delivers a fast-paced thriller—the first in an electrifying new series—peopled with sharp, intriguing characters and more twists and turns than a corkscrew.

Never a doubt. Never a mistake. Always for justice. Never for revenge. She’s the person you hire when you need something fixed—permanently. With a strict set of criteria, she evaluates every request and chooses only a few. No more than one job per country, per year. She will only step in if it’s clear that justice will not be served any other way. Her jobs are completed with skill and precision, and never result in inquiry or police investigation. The Fixer is invisible—and quite deadly. . . .

In the office of a clinical psychologist in Olympia, Washington, a beautiful young woman is in terrible emotional pain. She puts up walls, tells lies, and seems to speak in riddles, but the doctor is determined to help her heal, despite the fact that she claims to have hurt many people. As their sessions escalate, the psychologist feels compelled to reach out to the police . . . but it might be too late.

In Seattle, a detective gets a call from his son. A dedicated journalist, he wants his father’s expertise as he looks into a suspicious death. Together they follow the trail of leads toward a stone-cold hired killer—only to find that death has been closer than either could have imagined.

The Fixer is a book that reads like it wants to be a television show.  The pacing is quick and the way the scenes and storylines are broken up makes it easy to imagine this as something that would be on the screen.  The book starts off with a scene that would make a fantastic cold open to this hypothetical series, where we meet The Fixer of the title, and from there we delve into the rest of the book's world.

We follow several different characters as their stories intertwine, including a police detective who's suffered some losses of his own, a psychologist who gets too close to the case, a university president not known for making friends, and a barista with his own surprising past.  The scenes with Lydia, the psychologist, were some of my favorites, and I felt like the therapy scenes were handled well.  (The author is a psychologist, so no surprise there.)

There is an absolutely awesome twist in this book that is one that I both expected and totally didn't think would ever happen, all at the same time.  It was one of those "wouldn't it be cool if..." thoughts that I brushed aside, so I was super pumped at the big reveal.  There are several of these sorts of twists and reveals in the book, especially in the back half, which makes the end a very fast read.

On the down-side, the way the book is structured, you're often introduced to a character and then don't hear from them for several chapters, so I did find myself sometimes forgetting who was who, or why someone was important.  The ultimate plot resolution comes fast and furious, but in a pretty typical bad-guy-monologuing sort of way, and I thought it could have been handled in a more compelling way.

Aside from your typical murder-mystery violence, this book also has some references to past child abuse, a scene describing medical experimentation and cruelty to animals, and some scenes involving cutting/self-injury.

This is the first book in a series, which appears to focus on Mort Grant, the detective who works the case in The Fixer, so while this book stands on its own, it would definitely be interesting to see what happens next.

Thanks to the publisher, we've got the following giveaway going on.  Check it out and enter to win!


Grand Prize: $25 e-giftcard to the winner's book e-retailer of choice & a NetGalley review copy of THE FIXER and the next book in the series, THE RED-HOT FIX!
First Prize: Mystery Prize Pack! 5 assorted print mystery novels from the Random House Publishing Group