By Sarah A. - December 13, 2013
Thanks to TLC Book Tours, we're pleased to present a review for Red Phone Box, a collection of stories edited by Salomé Jones. Make sure to check out the rest of the tour stops to see other reviews! 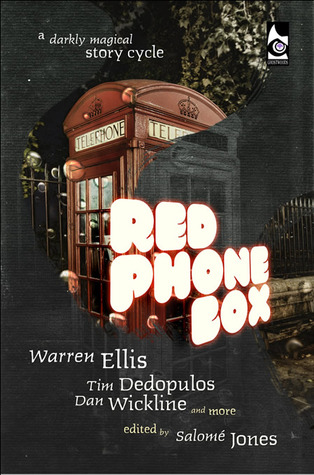 Shatter a mirror, and rearrange the pieces. What shapes will you find in the splintered glass?

Sinister forces roam London’s streets, skulking through the neon-lit rain. They are not alone. Haunted by memories of the man who abandoned her, Amber goes walking in the deep night. The phone box she enters takes her on a journey she could never have imagined, one in which the past and the future will be rewritten. Others follow in her footsteps, their lives intertwining, and the fate of the world hanging on their dance. Safran, pawn of unfathomable powers. Jon, who has lived and died and lived again. Gloria, who only intended to annoy her daddy. Cory, from a different world, on a desperate quest for allies. They and others will find themselves swept up as the playthings of gods who have managed to get along peacefully for millennia — until now.

Red Phone Box is a darkly magical story cycle, a network of interweaving tales by a dazzling range of masterful authors, including Gun Machine’s Warren Ellis. Let them take you to a very different London — one that hides on the other side of the fractured glass.

Red Phone Box is waiting for you…

Red Phone Box is an ambitious set of interconnected stories all centered around a red phone box in London.   Nearly all of the stories are intertwined in some way, with the same characters weaving throughout the many different chapters. With twenty-eight different authors, it's hard to imagine how they made it all sound like one cohesive book, but they really did an excellent job in putting it together and making everything flow well.

This is a hard one to categorize -- there are vampires and aliens and urban fantasy aspects and maybe something like time travel and also some mythology and horror and and and...  Every story brings a little something different to the table.  Trying to unravel all of the different threads in this one was a really great hook to keep the reader interested and engaged the whole way through.   This book really was unlike anything else I've read, but I could easily imagine it as a TV show or something.  I love interconnected stories where even seemingly minor players wind up being important and popping up throughout a story, and the visuals of that -- the "oh, I've seen that lady before!" reaction -- would be cool in a visual media format.

It can be a little bit of a tough read in the respect that it bounces around a lot, so you may spend several chapters not reading about a character only to come back to them later and have to remind yourself who they were and why they're important.  There is a list of characters at the end, with a quick one-sentence style summary of who they are as well as a listing of their first appearances.  But given the way that many characters pop up -- often unnamed at first, or just in the background, and then they turn out to be important later -- I think it might be best to refer to it  just if you've totally blanked out on who a character is.

Due to some subject matter and violence, I'd recommend this for mature readers.  It can be a challenging read at time, but definitely worth it, in my opinion.

Thanks to the publisher, we've got a copy of Red Phone Box to give away to a reader in the US or Canada.  Check out the Rafflecopter below and enter to win.