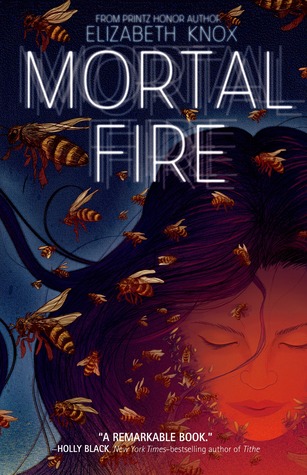 Sixteen-year-old Canny Mochrie's vacation takes a turn when she stumbles upon a mysterious and enchanting valley, occupied almost entirely by children who can perform a special type of magic that tells things how to be stronger and better than they already are. As Canny studies the magic more carefully, she realizes that she not only understands it--she can perform the magic, too, so well that it feels like it has always been a part of her. With the help of an alluring seventeen-year-old boy who is held hostage by a spell that is now more powerful than the people who first placed it, Canny figures out the secrets of this valley and of her own past.


I first started reading Mortal Fire way back at the beginning of summer, and it was a book that I just immediately took my time with.  It's very slow moving at first and full of detail, so it wasn't something that I could just rush through or skim and hope to have any chance of fully digesting what was happening.  I got maybe a third of the way through the book and had to put it aside -- not because I didn't enjoy it, but because I had too many other books stacked up to read, and this review was already overdue.

So many months later, I picked it up again in my effort to get through all the half-read books I've got strewn around my house... and apparently I initially stopped reading Mortal Fire right before things got really good, because I read the last two thirds of the book over the span of a few days, while the first third took about a month.  Whoops.

We spent a lot of time getting to know Canny, her complicated family history and her relationship with her mother, who is somewhat of a local hero from actions taken long before Canny was born. Canny herself is a mathematical genius, but there's a little something more -- sometimes she can see magic written in the air, symbols that no one else can see but which she can sometimes untangle the meaning of.  On a summer trip with her step-brother and his girlfriend, Canny finds a place where this magic runs wild.  It's here that she meets Ghislain, a mysterious young man who lives by himself, away from the rest of the village.  Canny's attempts to learn magic and understand Ghislain's secrets don't go unnoticed by the rest of the village, who are wary of outsiders.

As I mentioned, this book is slow to start, and things don't really pick up until Canny and Ghislain meet, since it's here that she begins to get a greater understanding of the magic she sees, and also begins to learn some of the secrets of the Zarene Valley and the people who live in it.  The relationship that grows between Canny and Ghislain is sweet but a bit strange, for reasons I can't go into because of spoilers.  I can't say that I understood all of the magic and mythology that went into creating the story, but it's very beautifully done anyway.  You do have to keep reading for a lot of things to pay off -- there are a lot of stories that get told in bits and pieces along the way, so it often takes a while for you to understand the significance of a story or an event that's mentioned.

Despite being a bit tough to get engaged with at first, this is a very beautifully written story.  You spend time getting to know all of the characters, even ones who you don't necessarily think would be important.  Don't be afraid to take your time with this one, or put it down and come back to it later, because it does eventually pay off in the end.
fantasy magic