By Sarah A. - November 21, 2013
Thanks to TLC Book Tours, we're pleased to present a review for The Sowing, a new dystopian novel by K. Makansi. Make sure to check out the rest of the tour stops to see other reviews! 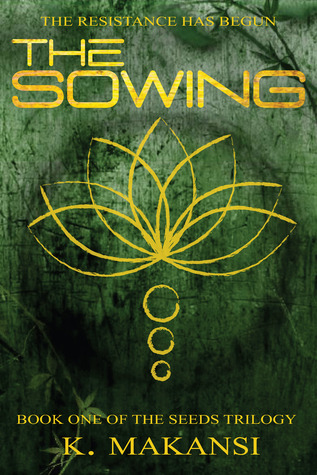 The Famine may be over, but the Resistance has just begun.

When Remy Alexander is fifteen, her older sister is murdered in a cold-blooded classroom massacre. When the Okarian Sector hides the truth behind the attack, Remy's family goes underground to join the clandestine and growing Resistance movement. Now, three years later, Remy is beginning to find clues about why her sister was murdered. But at the same time, Valerian Orlean, the boy Remy once loved, is put in charge of hunting and destroying the Resistance. As Vale fights to protect his people and Remy seeks justice for her sister, the two are set on a collision course that could bring everyone together - or tear everything apart.

THE SOWING, the first book in The SEEDS Trilogy, is set in a post-apocalyptic world. In the wake of environmental destruction and a devastating population crash, the Okarian Sector was forced to fight to establish a civil society in a chaotic world. After the loss of seed biodiversity in the destruction of the Old World, genetic modification and artificial agricultural techniques are the Sector’s only choice. Science reigns supreme. The Okarian Agricultural Consortium, a corporation dedicated to perfecting these modified seeds and providing only the best food and medicine to its citizens, becomes the government’s most important arm. But even the purest gold is tarnished over time, and the Sector’s noble goals devolve into manipulation, control, and oppression.

When I briefly explained the plot of The Sowing to some friends -- dystopian novel set in a futuristic world where, among other things, food is exclusively made of GMOs and tailor made to a person's station in life -- they both said the same thing: "and where's the fictional part?"  Sure, that's a gross oversimplification of the story, but like all good dystopian novels, it's grounded in a bit of truth and then set in the far future and taken to the extreme.

The Sowing is a great initial entry into a series set in the far future world of the Okarian Sector, and out in the wilds with the Resistance fighters.  The opening chapter is a great hook to get you interested -- think any cold open/pre-title sequence scene in your crime or paranormal show of choice.  We're introduced to our first narrator, Remy, and the other major players at their Resistance base, who are all people who have defected from the Sector for various reasons.

Our second narrator is Vale, a privileged young man whose parents are the most powerful people in the Sector.  Vale's new job involves rooting out the Resistance, which means finding Remy, who he's been hung up on since they were teenagers.  Being someone who has never experienced hardship and never had any reason to distrust his parents or the Sector, Vale can be frustratingly naive sometimes, but has a surprisingly open mind as his investigation into the Resistance goes deeper than he could have predicted.

There are some parts of the book which drag, and there are a lot of characters introduced, which made it hard to always keep track of who was who, or who was important.  Everyone seemed to get fleshed out all at once, even when they were only minor characters.  I'm sure some of them will come around to be more major players in later books, though, so you definitely have to pay attention.  The action sequences are tight and you really do get an idea of how much danger Remy and the Resistance are in as the story goes on.

I am a sucker for stories of political intrigue and conspiracies, so this one was right up my alley.  The Resistance is easy to root for, especially once you see the lengths the Sector will go to to destroy them.  There's a bit of a love triangle with Remy, Vale, and Soren, another Resistance fighter, which I'm sure will be explored more in future installments.  It wasn't an overwhelming love triangle, though, and Remy to her credit is generally pretty focused on survival, and not which boy she's going to hook up with.  I look forward to future books and seeing Remy grow into her own.  The Sowing asks a lot of questions and introduces a lot of plot threads that don't get resolved, so while it's not a true cliffhanger, you are definitely going to want to read the next book.

Sound interesting?  If you've got an address in the US or Canada, you can enter to win a copy of the book!  Check out the Rafflecopter below to enter.