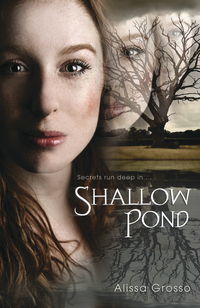 Barbara “Babie” Bunting is constantly mistaken for her sisters, but she’s determined not to end up like her family. She doesn’t plan to stick around Shallow Pond after graduation, and she certainly won’t be ruined by a broken heart. That is, until fellow orphan Zach Faraday walks into the picture, and Babie can’t deny their chemistry.

When her oldest sister, Annie, comes down with a mysterious illness—initially dismissed as “love sickness”—Babie and Zach start investigating what exactly killed the girls’ mother and why their late father became so consumed by grief. What they find changes everything.


This is a hard book to review without spoiling major plot points, but I'll try. For most of this book, I was just not sure at all what I was reading.  Was it a mystery? Was it a romance?  Why is there so much angst? Why are Barbara's friends so crappy?  And then around 60% in, the book took a massive turn into into sci-fi-ville in a plot device that the story never really fully capitalized on.  This is a book that I kept reading because I really wanted to know what the catch was -- you can tell for most of the story that there is something else going on beneath the surface, but no one really knows what is is, our characters included.

Barbara, like the reader, realizes there's something else going on other than her dysfunctional family and sad past, but the conclusions she jumps to are rapid-fire and ... maybe they're believable to her, but they felt ridiculous to me, and the way she latches on to what she feels is the "truth" so early kind of signals to the reader that she is, in reality, probably dead wrong.

I think my biggest problem was that I had to endure far too much nonsense to get to the big reveal.   Once we get there, the story gets a little better as the secrets start to come out fast and furious, but this felt like a sci-fi book written for people who don't like sci-fi.  The plot twist is shoved in with no thought as to how to make it realistic.  Annie is sick the entire book and we never get a good resolution on this, and the explanation feels sort of amateur.  There's a lot of very handwaved science, like no one wanted to do any research into any of the science things that would make her sickness believable.

The romance between Barbara and Zach was frustrating, with Barbara doing her best to push him away.  Understandable, because she's determined to get out of Shallow Pond, and she's afraid that falling for a guy is going to get her sucked into staying.  So of course they fall into can't-be-without-you love.  Of course!  Before they get there, though, she spends a lot of time refusing to even be his friend, but also totally shutting him, and her friends, out as to her reasoning why.  Barbara's friends are crappy, to be sure, constantly jumping to their own conclusions, and I wish they'd all just take a deep breath and use their words.

There were just some weird writing and character choices that frustrated me.  Characters, especially middle sister Gracie, were constantly screaming or shouting or shrieking.  I've never seen so many said-is-dead dialogue tags in one book, and I just imagined Gracie screaming shrilly every time she was on the page. Which she usually was, because her characterization was just all over the place. Several characters have dark secrets that are actually very serious and sobering but which are never treated with the appropriate gravity and thought they deserve.  Barbara volunteers at a women's crisis hotline and for some reason we're treated to her opinion that basically all the women calling just need to tough it up and get over it, which didn't really endear her to me.

This is a book that really just had too much going on and couldn't decide what genre it wanted to be.  Combine that with some unsympathetic characters and a sci-fi mystery that falls flat, and you've got an overall frustrating read.
mystery scifi