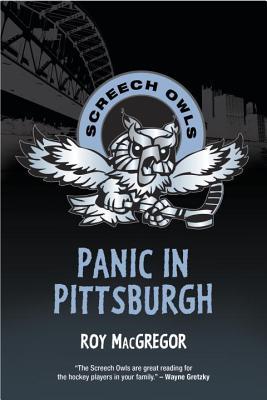 The Owls have been invited to Pittsburgh to compete in the biggest hockey tournament ever to be played on outdoor ice. The open-air tournament is to be held in the massive Heinz Field arena, home of football's mighty Pittsburgh Steelers. But almost as soon as the tournament begins, Travis suffers a serious concussion, just like the injury that sidelined Penguins' superstar Sidney Crosby. Travis is confined to his hotel room so his injured brain can recover. His memory is patchy, and he's having some weird dreams. And when he stumbles upon an outrageous plot to steal hockey's most coveted trophy, he can't be sure if his mind is playing tricks or the danger is a terrible reality.

First of all, I will admit that I requested this book from NetGalley mostly because it takes place in Pittsburgh. Pittsburgh is my adopted hometown, a place I love and adore for all of the things that make it unique: the inclines, the view from Mount Washington, and even the tourist trap known as Station Square. So, even though this book is about hockey (which I know nothing about), I thought I would give it a try. Besides, I reasoned, I need to read more middle grade novels since I am writing one for NaNoWriMo, and mysteries intrigue me.
I almost DNF-ed it right away. Not because I was lost and bored by the descriptions of hockey games (I hadn’t even gotten that far yet), but because I could not get over the inaccurate descriptions of Pittsburgh landmarks. First, the Consol Energy Center is described as “a massive NHL rink up on the hill.” Um . . . no. The Consol is not on a hill, and it’s not just a hockey rink. A bunch of other little details about Station Square, the incline, and Heinz Field bothered me too.
But I gave the book a chance, because who doesn’t want to read about an inclusive kids’ hockey team who solves mysteries all over the United States? This is apparently the latest in a very successful series by author Roy MacGregor. In this installment, the kids rescue the Stanley Cup from thieves, apparently for the second time. Which I suppose is cool for kids who enjoy hockey and mysteries, but just didn’t excite me. Action-packed hockey sequences were more prevalent than the (unbelievable) mystery plot that these kids solved on their own.
I give this author kudos, however, for representing a kids’ sports team where boys and girls of different backgrounds and physical abilities play together. One minor character is even in a wheelchair, and although he can’t play he is still considered a member of the team.
My conclusion: I’m just not the right audience for this book. It will appeal to middle school boys (and probably girls) who enjoy both hockey and mysteries, but probably not a lot of others. Any adult from Pittsburgh will probably be confused by the inaccurate descriptions of our fair city. I know I don’t know a lot about hockey, but it’s clear to me that this author knows a great deal about the sport, but not a lot about Pittsburgh.
Panic in Pittsburgh fell flat for me, but I am sure its intended audience will feel differently.