On a few side notes about this book and author.  I typically don't include any thoughts about guest posts, but I couldn't resist this time.  If you are one of our loyal readers, then  you probably have realized that Uncaged isn't exactly one of our normal offerings.  I present this guest post for two reasons- one, it reminds me so much of Con Air (and that is my FAVORITE movie) and two, this author is incredibly nice.  So check the book out, read the guest post, and then go check out the book (it is on sale until the end of the week!) 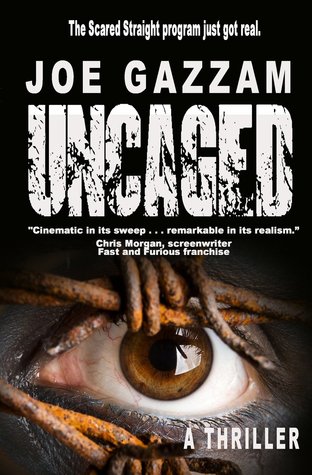 "Uncaged" the novel -- is a thriller about the son of a Governor remanded to a Scared Straight youth crime-prevention program at the worst maximum security penitentiary in the country. Inside, the boy finds himself alone and desperate in the midst of a full-fledged riot as a group of highly trained convicts take over the prison.

Suddenly the most valuable commodity inside this deteriorating inferno, the boy’s only allies become a reluctant, hardened lifer and a young female psychologist. Together they will have to team up not simply to survive -- but to stop the convict group’s larger diabolical plan.

People ask me why I took time away from my screenwriting career to write a novel.  It was because Hollywood dared me to.  See, when you’re a screenwriter, sooner or later someone will say to you…

“Look, if you don’t want someone changing your work, go write a novel.”

I’ve heard this a hundred times.  What they are trying to say is that screenwriting is collaborative.  Which is true.  This, by its nature, involves many, many compromises because it’s about getting multiple people to agree.  And this invariably means — meeting in the middle.  My wife and I can barely agree on what to have for dinner.  Getting two (exec and producer) smart, confident people to agree on something as complex and subjective as a script – is dramatically harder.

Now, to my novel writer friends, this sounds like a fate worse than death.  They can’t imagine making so many “sacrifices.”  To their point, it’s not always easy.  But it’s not always horrible either.  It’s all about the people you are working with.  If they are bad at their jobs, the process can be interminable.  If they are great at it, it can be an enormous boost.  Because the good ones have the ability to not only find problems, but also help fix them.  They can and do make your script better.

But back to the original question — why did I write a novel?  Good or bad, the screenwriting process is always going to be a group effort.  So, at some point, when someone said to me, “Look, if you don’t want someone changing your work, go write a novel”  –  I thought to myself, “Okay, I will.”

I’m not sure they ever really expect you to do it.  Most screenwriters I know never do.  I’m not sure why.  Well, there is one glaring reason.  Money.  The screenwriting biz is hard.  It’s also a monetary rollercoaster.  To take time off, to put a giant hole in your budget, is very stressful.  When you have a baby, a wife and a mortgage…it’s tough.  And to risk taking time away from it to write a novel is even tougher.

You hope people will buy the book (and of course love it) and that these sales will somehow fill the budgetary gap.  It is a risk and a gamble.  But to me, it was a bigger gamble to stuff everything I owned into a car and come out to Los Angeles, not knowing anyone, not ever having visited California in my life.  And that one worked out pretty well.

Writing this book was one of the best experiences of my life.  It was liberating in a way I haven’t experienced in quite a while. It was both scary and exhilarating at the same time.  So, if I had to pick either screenwriting or writing novels, I don’t think I could choose.  I can’t imagine a scenario where I wouldn’t do both.  I’ve grown to love them equally.  And ideally, one will fuel the other.  Hopefully, I will write novels that can be set up as movie projects, which I would then adapt into screenplays.