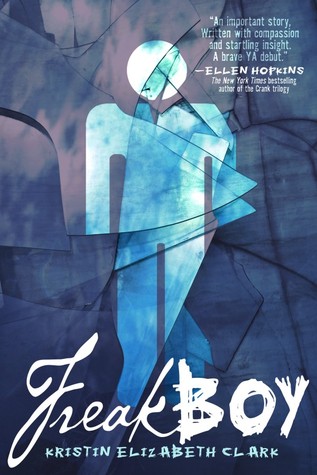 From the outside, Brendan Chase seems to have it pretty easy. He’s a star wrestler, a video game aficionado, and a loving boyfriend to his seemingly perfect match, Vanessa. But on the inside, Brendan struggles to understand why his body feels so wrong—why he sometimes fantasizes having long hair, soft skin, and gentle curves. Is there even a name for guys like him? Guys who sometimes want to be girls? Or is Brendan just a freak?

In Freakboy's razor-sharp verse, Kristin Clark folds three narratives into one powerful story: Brendan trying to understand his sexual identity, Vanessa fighting to keep her and Brendan’s relationship alive, and Angel struggling to confront her demons.


Freakboy is a story is told in three alternating voices: Brendan, who is struggling with understanding his gender identity; his girlfriend Vanessa, who has essentially centered her entire world around her relationship; and Angel, a young trans woman who works at a LGBT youth center.  The stories do intertwine, but our main focus is on Brendan and his journey of self-discovery, however.  He's realizing that sometimes he identifies with the idea of being a woman, and the harder he tries to push away at these feelings, the more they surface.  He loves Vanessa, he likes some "stereotypical" guy things, but he also fantasizes about having a woman's body.  It's a difficult discovery for Brendan and he is understandably very confused once the realizations start coming and don't stop.

I really liked the fact that, in this book, nothing was simple.  While the book does leave Brandon and his friends in a hopeful place, there is no easy, happily-ever-after ending, no cutesy "it gets better" message.  Brendan has a whole new vocabulary - transgender, genderqueer, gender fluid - to explore, to see where he fits.  Even as the book closes, while Brendan is closer to acceptance, his journey is still just beginning.  While leaving the story on an open-ended note could be frustrating to some readers, I feel like the real important aspect to this story, and the part that many LGBT youth can identify with, is the struggle to accept yourself in the face of peers and society who does not accept you, and finding your own family and support system to live your life the best you can.

Like many other reviewers, I think this is a book that needed to be written, to help be a resource and to provide representation of gender variant kids in fiction.  I sometimes felt like I wanted more from it, like I do with most stories in verse, but overall, it is a very powerful story that I hope gets the exposure it deserves.

As far as content, topics include bullying, underage drinking, depression, and suicidal thoughts, as well as some sexual situations.  Freakboy is an important book and I don't think readership should be limited to LGBT kids; straight kids and allies and everyone in between can find something to relate to with the stories of Brendan, Vanessa, and Angel.
Contemporary LGBT verse