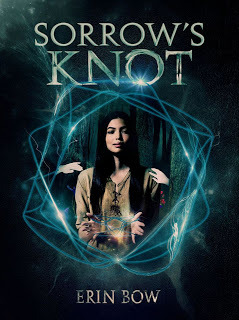 In the world of Sorrow’s Knot, the dead do not rest easy. Every patch of shadow might be home to something hungry and nearly invisible, something deadly. The dead can only be repelled or destroyed with magically knotted cords and yarns. The women who tie these knots are called binders.

Otter is the daughter of Willow, a binder of great power. She’s a proud and privileged girl who takes it for granted that she will be a binder some day herself. But when Willow’s power begins to turn inward and tear her apart, Otter finds herself trapped with a responsibility she’s not ready for, and a power she no longer wants.

Warning! When a book's title includes the word sorrow in it, take that crap seriously.  This book is heartbreaking and has joined the club of books to have made me cry while on public transportation.  Congratulations, Erin Bow, you are now a member of a small, esteemed club of authors who have made it rain on my face.

Sorrow's Knot is hands down one of the most beautifully written books I've read in a long time.  I wasn't entirely sure what to expect when I started reading, I just knew that the summary seemed interesting and that I'd heard good things about Bow's writing before.  I was blown away whenever started reading the book and was stuck trying to find that balance between wanting to read slowly in order to really absorb the world, and reading really fast because I had to know what happened.

Bow weaves an enchanting story focusing on Otter, a teenager who is on the cusp of womanhood, who expects to inherit her mother's title of Binder, being the person to bind the dead and create the wards to keep the dead from coming back.  We also quickly meet Kestrel and Cricket, Otter's two closest friends in Westmost.  They have grown up together and are all contemplating what is next for them as they reach adulthood.  But things take a darker tone whenever people in Westmost start turning their stares to Willow, Otter's mother, who is a powerful binder but who also appears to be going a bit mad because of it.  Things start to change very rapidly for Otter and her friends as they have to deal not only with Willow but with threats from the outside: the dead that lurk in the shadows, including the deadly White Hand.

The worldbuilding here is astounding, and all of the information flows naturally to the reader.  There are no lengthy, out-of-place infodumps that jolt you out of the story.  Through the use of storytellers in the culture of Westmost, we get glimpses at the mythology that drives the community, which helps flesh the history of the world out.  The White Hands are also a real threat, and we do get to see them in all of their heart-stopping, terrifying action in the story.  They're not just an entity that we're told to be afraid of: we see exactly why the people of Westmost are so terrified of them.

I will admit that I don't know that I always understood 100% of the mythology of the story, but that didn't affect my enjoyment of the book at all (obviously).  I look forward to re-reading this one (I think I pre-ordered a finished copy when I was halfway through reading the Netgalley ebook) and really giving myself the time to soak up all of the details and the ways that the story weaves together and builds.  I also love the fact that it is a fantasy story set in a more Native American/First People society - a nice change of pace from your usual medieval European setting.  And it's a matriarchal society, to boot.  Sorrow's Knot may secretly have been the book of my heart, a book I didn't know I needed until I read it.

While this is a dark, sometimes bleak, sometimes scary, story, I really do recommend it to anyone! Bow's writing is captivating and lyrical, and very hard to put down.  I am looking forward to what she comes up with next, and already ordered her previous release, Plain Kate, to check that out too.

Sound interesting?  Want to read it for yourself?  (Have tissues ready!)  Enter the giveaway below to win one of three e-book copies of Sorrow's Knot.  The giveaway is open internationally, so don't miss out.