By Sarah A. - October 24, 2013
Thanks to TLC Book Tours, we're pleased to present a review for NOS4A2, a new horror novel by Joe Hill. Make sure to check out the rest of the tour stops to see other reviews! 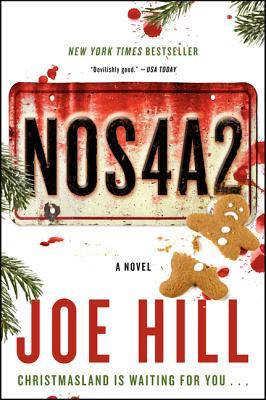 Victoria McQueen has a secret gift for finding things: a misplaced bracelet, a missing photograph, answers to unanswerable questions. On her Raleigh Tuff Burner bike, she makes her way to a rickety covered bridge that, within moments, takes her wherever she needs to go, whether it’s across Massachusetts or across the country.

Charles Talent Manx has a way with children. He likes to take them for rides in his 1938 Rolls-Royce Wraith with the NOS4A2 vanity plate. With his old car, he can slip right out of the everyday world, and onto the hidden roads that transport them to an astonishing – and terrifying – playground of amusements he calls “Christmasland.”

Then, one day, Vic goes looking for trouble—and finds Manx. That was a lifetime ago. Now Vic, the only kid to ever escape Manx’s unmitigated evil, is all grown up and desperate to forget. But Charlie Manx never stopped thinking about Victoria McQueen. He’s on the road again and he’s picked up a new passenger: Vic’s own son.

This book was so delightfully creepy!  I've never read a novel by Joe Hill before, though I was familiar with his writing for comic books (Locke & Key, The Cape, both also delightfully creepy and twisted titles), so I had a little bit of an idea of what to expect, and I was excited, and not at all let down.

I got off to a bit of a slow start with this book, although that was more my fault than the writing -- I was reading on a plane, multitasking, and then, worst of all, reading while really tired, so I kept reading the same passages over and over.  Despite a great hook of an opening to grab the reader, I had a hard time keeping my attention in place.  The plane ride back home went better, though, and I read straight through that ride... and then the train ride home... and then instead of eating dinner or unpacking... and then all the next day until I finished it.  Once I got into the book's groove, it was almost impossible to put down.

Our main character is Vic, who we meet first when she's in her early teens.  Her home life is troubled, and one day when she's trying to get away from her fighting parents, she hops on her bike and rides straight into a very weird, supernatural situation where she's able to find anything, if she puts her mind to it.  This special ability comes with a price, though, since as Vic gets older, she gets more unstable.  I thought the way her supposed mental illness and drug/alcohol problems were handled was very well done, and realistic given her life circumstances -- both the paranormal magic bridge, and her encounter with Charles Manx.  Adult Vic looks tough but is so vulnerable, walking a fine line with her sanity and sobriety, when she gets pulled back into Manx's web, to save herself and her son.

Hill has a way of making all of his characters that right mix of vulnerable and wounded but also heroic in every-day ways.  We don't always get backstory right away for characters, but the information is given out in little snippets, right when it would pack the most punch.  It can be a little frustrating at first, if you find yourself wanting to know what a character's deal is, but this way is much more effective than having a big info-dump on a character's history and what makes them tick.

Although NOS4A2 was long, there are still some things I wish we'd seen more of.  I wish there was more of Vic's progression from teenager to a very troubled adult.  We get bits and pieces of those middle years told as backstory, but I would have loved to experience more first-hand.  I also felt that the ending was rushed a bit. Manx is this evil, evil character and Vic spends much of the book chasing him, dealing with the trauma that he caused her, and chasing him some more, but his storyline wrapped up almost too quickly.  I wanted him to get what was coming to him and then some more after that, he was so evil.

One of my favorite aspects was the illustrations scattered throughout (drawn by Gabriel Rodríguez, the artist behind Locke & Key).  They added both whimsy and menace, depending on the drawing.  These illustrations are exclusive to the print version.  Also, there's a brief note, about a page long, tucked into the last page that goes into detail about the typeface, that actually continues the story, just a bit of an easter egg for readers, and apparently that note isn't contained in the ebook edition, either.  So I'd recommend picking up a hard copy for this one, or at least thumbing through it at the library, to get the full experience.

Given the subject matter -- murder, child abduction, drug/alcohol abuse, sexual assault, a few scenes of animal abuse, physical violence, etc. -- I would recommend this for mature readers.  There are also repeated issues around teeth, and teeth growing in weird ways, and teeth falling out, and if you have a tooth squick like I do, you will be very uncomfortable at those parts.  (Yes, I can read about horrific deaths all day long but have a character lose a tooth and I am going to go all NOPE NOPE NOPE on the book.)  I probably would have read it as an older teen -- I was that kid growing up -- but I doubt my mom would have been happy about it if she really knew the content.
horror paranormal supernatural