How to Hide a Lion 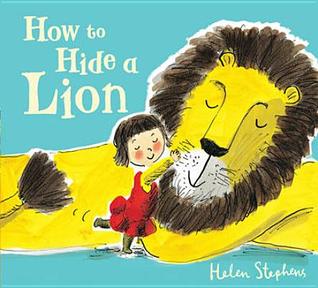 How to Hide a Lion
By Helen Stephens
Published on October 1, 2013
Published by Henry Holt and Co. (BYR)
Source: Publisher

Where can a very small girl hide a very large lion? It's not easy, but Iris has to do her best. After all, mums and dads can be funny about having a lion in the house. But can Iris hide her lion for ever?

What happens when a lion goes into town to buy a hat? He gets chased out by the scared townspeople, of course. He runs right into young Iris’s playhouse. Iris (who isn’t afraid of lions) takes him into her house and successfully hides him from her parents. They play and read stories until, one day, the lion falls asleep and doesn’t hear the parents coming. Once again, the lion is chased off. He runs into town, where he hides until he becomes the town hero. In the end, everyone finds out what Iris knew all along: the lion was a kind lion. The mayor rewards him with a hat, “Which was all he’d come to town for in the first place.”

This was a sweet picture book with a nice message to not judge someone based on stereotypes. Stephens’ illustrations appear to be watercolor, which gives the book a gentle feel to go along with the message.

I was impressed not only by Stephens’ ability to bring an important message to children in a way they can understand, but also by the artwork, which included people of different skin tones, and one woman who was in a wheelchair in the crowd scene at the end. The book worked coherently to send its message, but was also very kid-friendly, and reminded me once again of the Little Golden Books I read as a child.