Confessions of a So-Called Middle Child 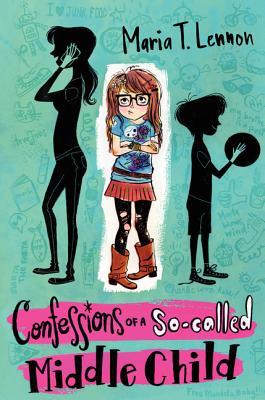 Confessions of a So-Called Middle Child stars the hilariously cheeky reformed bully and tween hacker Charlie Cooper as she tries to ditch her middle-child reputation and make cool friends at her new school in Los Angeles. But being cool isn't as easy as it looks. Charlie has to face down the mean girls and decide between right and wrong once and for all when she learns the terrible truth behind Marta the Farta's bad attitude and loner status. And Charlie has to do it all in outfits meant for the runways!

Maria T. Lennon has created a fresh and fun story that brings Mean Girls to the tween level, peppered with snarky asides, major attitude, and advice to spare from Charlie-whether you asked for it or not.

Check out an excerpt: "Her name was Marta the Farta, and you could see her from space, she was that bad. She had a beard, teeth the color of butter, and a nest of hair that defied gravity and provided homes for small animals; and yes, she loved to fart. But she was also the most talented gymnast I'd ever seen in my life. We're talking Olympics time. So anyway, this is the story of how I changed her life, and yeah, all right, fine, how she changed mine."


I was immediately struck by the premise of this book - Charlie C. Cooper, a reformed bully who wants to make cool friends at her new school while ditching her middle child reputation.

First, let me point out the positives. This book was honestly a very fun read for me overall (but, then again, I am an adult...) It had the upbeat, decently fast-paced tempo that will keep middle graders flipping pages for sure.

There is a spectacular amount of middle grade comedic elements. Come on - with a character named Marta the Farta how could there not be?! (At times, the immaturity regarding farting was mildly annoying, but I kept reminding myself of how amused that age range would be by it, so I'll let it slide.) The friendship that develops between Charlie and Marta is cute and believable. Marta is far from the "geeky unpopular" person that most people would think of when they hear the word "outcast." She's actually a pretty kick-butt tough chick who doesn't really want to be befriended.

Now, onto the shortcomings. There was a lot of times that Charlie was brutal when describing looks or how gross someone was. She seemed... judgmental, I guess would be an appropriate word for it. I'm not quite sure a middle grader would take these in the context of the story, like I did as an adult, and leave them there. Personally, thinking of myself as a child, I probably would have internalized those things while reading - thinking of myself as gross or fat, and I'd hate to see children feel that way.

Honestly, it was a likeable read, but I think in offering it to middle-grade children, I may have to think on whether they would get the point of the story or become caught up on the aforementioned downfalls. It's all in the maturity and self-confidence a child displays. We want to build children up, not break them down.
Middle Grade