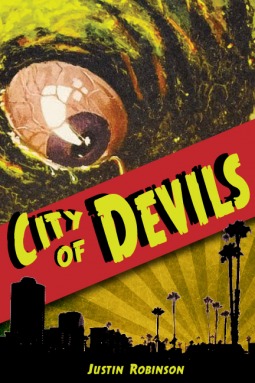 World War II was only the beginning. When the Night War ravages America, turning it into a country of monsters, humans become a downtrodden minority. Nick Moss is the only human private eye in town, and he’s on the trail of a missing city councilor. With monsters trying to turn him – or, better yet, simply kill him – he’s got to watch his back while trying to find his man. Or mummy, as the case may be.

Once, it was the City of Angels. But now, Los Angeles is the City of Devils…and Nick has a devil of a job to do.

Then stop right now and go get this book.  Read it, and come back and thank me later.

Our hero, Nick Moss, is a private detective, specializing in investigating missing persons cases.  But this is no run of the mill detective story: in the world of City of Devils, monsters are real, and humans are at a distinct disadvantage.  While most cops and detectives are werewolves or wolfmen, Nick is 100% human.  This puts him at a distinct disadvantage: aside from the supernatural advantages monsters have, humans have to be in their homes by dark, or be at risk of being turned into a monster themselves.

Nick usually finds himself on the case of missing humans, but this time, he's looking for Juba II, a missing mummy who happens to be a very important man around town.  Nick's investigation takes him deep into the monster side of town, to such places as a poltergeist biker bar, the lot of a Hollwood movie studio (P.S., Hollywood is literally run by monsters), and a very interesting sort of brothel.

The worldbuilding here is awesome, and you can tell the author has really thought out everything about the universe.  You learn what the weaknesses are for different monsters, where they hang out, what their strengths are... there's been a lot of thought as to how the world works and how humans and monsters manage to co-exist.  You get a bit of backstory on Nick, who was a soldier during WWII, and then again during the Night War, which was essentially the monster uprising, before he turns to being a PI. I would have loved to see a little more about the Night War, but ultimately, it's not important to the story, and the reader knows all they really need to know about it.  (Do I smell prequel? Just a suggestion; I'd read it.)

We're taken along for the ride with Nick, who is definitely out of his element at times,  and it's fun to watch as he tries to figure out ways to get himself out of whatever mess he'd gotten himself into.  (There is a lot of running involved, and also some slime.)  The story takes a lot of twists and turns and I definitely did not predict the ending.  There are tons of laugh-out-loud moments, particularly regarding the group of monsters who haunt Nick's doorstep at night, hoping to turn him into one of them.  There's also a very appropriately named wendigo who appears for like, one page, but which had me kicking my feet in glee.  (Never let it be said that extremely minor characters can't make an impression!)

I really enjoyed reading this one.  It was hilarious, and very fast paced, which makes it a tough one to put down.  If you're interested, check out the giveaway below!  Thanks to the publisher, we're giving away three ebook copies of City of Devils.  This giveaway is international!  (But!  If you're a winner and you have an address in the US or Canada, you'll get the ebook AND some swag!)