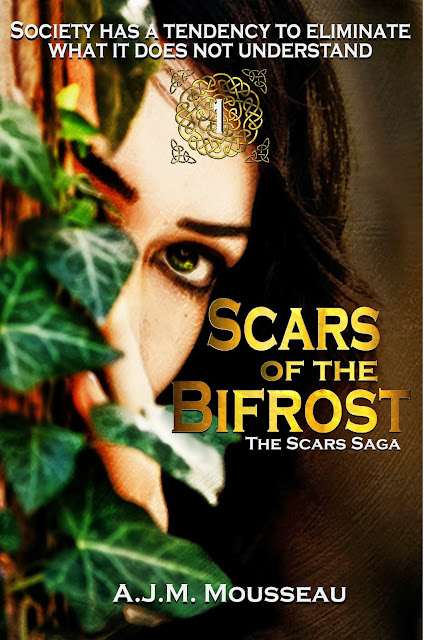 Scars of the Bifrost
ByAJM Mousseau

Synopsis:
Freya Catten has lived on the fringes of society her entire life, growing up in hiding with her mother in the deepest, wildest places left in North America—the national parks and forests. Freya's mother taught her how to live off the land, away from civilization—mysteriously warning her of the dangers of getting involved with society and leaving traces of her DNA behind. But five years ago Freya's mother abandoned her, leaving Freya to survive on her own.

Freya knows how to stay alive, whether she's hiding in the forest or running on the city streets. She changes her appearance often and owns nothing but her backpack filled with survival gear and a necklace that had been her mother’s.

But, keeping one step ahead of Social Services isn't her biggest fear. Freya's true terror lies with The Takers—strange men who rappel from silver cords out of the deep blue sky from nowhere. They snatch up their victims then evaporate without a trace. Freya holds a dark suspicion—that the Takers are really after her, and they are closing in.

Freya realizes that if she is to ever have a normal life she must first find her mother and answer the questions that have kept her in hiding. Along the way, she meets Theron Hawk—a rugged teenage soldier from a war-torn country—and finds herself truly trusting someone for the first time in her life.

As secrets are uncovered, and Freya comes closer to solving the mysteries surrounding her life, her blood and the priceless necklace that lays at her throat, the scars of the Bifrost will threaten to rip apart Freya's very existence.


SCARS OF THE BIFROST is the first story in The Scars Saga and is a Young Adult science-fiction/fantasy/paranormal romance novel infused with wilderness survival, urban fantasy, dystopian elements and mythological realism.

And now a special excerpt from the book....

The song ended too quickly. “Can you play it again?” Theron asked anxiously.
I nodded, happy he was so pleased. “As many times as you want,” I assured him and played it again and again.
The third time through I asked, “Would you like to dance?”
“I've never danced before.” His voice was slightly unsteady. I had watched him throw a knife with deadly accuracy into the flesh of an opponent with no hesitation, and now he was going to be nervous?
I stood over him and offered my hand. He took it and got to his feet. I positioned myself about a ruler's length in front of him, then held my breath as I closed the gap.
“You place your hands here.” I put both of his hands on my hips.
“I like dancing already,” he said with a smile that filled even his eyes.
“Don't be fresh,” I scolded playfully. Then I put both of my hands onto his shoulders.
“Now, I definitely like this.”
I smiled. I liked it too.
“Now we sway.” I gently rocked us back and forth and moved my feet nice and slowly.
He checked his stance and loosened up when he realized he had tensed. He looked into my face with an expression I couldn't name. Then he closed his eyes and sunk his fingers deeply into the muscles at my waist. The action took my breath away.
Intensity. The expression on his face had been intensity.
I closed my eyes, feeling it too, and involuntarily slipped my hands up onto the nape of his neck—my fingers tangled into his dark, loose hair.
What are you doing? But the music continued to play, and I had been so broken—and obviously so had he. He was strong and overwhelming, and for this moment … just for this one moment, I wanted to allow myself to get lost in his arms, lost in his power. It was—just a song—just a moment.

About A.J.M. Mousseau: I am an author and university student. I live in a recreational vehicle -- by choice -- with my awesome husband, four amazing kids, and huge, fluffy, 85 pound golden retriever named Titan. I write and do school on line as we travel throughout the U.S. and Canada. It is incredible to live in a new place every few months (sometimes weeks) and to see everything! We have lived this clan and tribal lifestyle for two years now and have been to over twenty national parks and forests. They gave me a lot of inspiration for Freya's story.

Unlocking Brísingamen, the next book in the Scars Saga, will be released very soon!