By Sarah A. - July 20, 2013
Thanks to Tor Books, we're pleased to present an interview with Susan Krinard, author of the upcoming new adult/urban fantasy novel Mist, which puts a modern twist on Norse mythology.  I am excited to read this one, and I hope you are too!  Check out Susan's answers to our questions, and then enter a giveaway to win a copy for yourself! Or so she thought.

When a snowy winter descends upon modern-day San Francisco in June, Mist’s quiet existence starts to feel all too familiar. In quick succession, Mist is attacked by a frost giant in a public park and runs into an elf disguised as a homeless person on the streets…and then the man Mist believed was her mortal boyfriend reveals himself to be the trickster god, Loki, alive and well after all these years.

Loki has big plans for the modern world, and he’s been hanging around Mist for access to a staff that once belonged to the great god Odin. Mist is certain of one thing: Loki must be stopped if there is to be any hope for Earth. But the fight is even bigger than she knows….

Because Loki wasn’t the only god to survive.

What was your inspiration for MIST?
I’ve always loved Norse mythology, and as a kid I also adored those silly superhero cartoons (Thor, Iron Man, Hulk, Spider Man).  Putting mythology together with urban fantasy came very naturally to me, and I also loved the idea of a Valkyrie heroine. While traditional Valkyrie weren’t really fighters—their main job was to select brave warriors to become Odin’s permanent “army” in his great hall Valhalla—Mist always chafed against this role, and finally become a real warrior after she “realized” that the gods who sent her to Midgard (Earth) were dead. She’s put most of her past behind when the story starts, but  is forced to take on a leading role in the fight for earth’s future.

What was the most challenging part about bringing Norse mythology into a present-day/urban fantasy setting?
Probably the lack of familiarity for most readers. While I wrote the original story “Mist” (in the anthology Chicks Kick Butt) well before the first Thor movie was released, I hope that some of the elements won’t seem quite so strange for readers as they might have been before the first movie. Still, my mythological universe is quite different from the comic or movie version. I do hope that readers’ imaginations and curiosity will be provoked, perhaps encouraging them to learn more about this mythological world.

Do you have a "fancast" for your characters? (aka "If MIST were a movie, I'd want .... to be in it")
Benedict Cumberbatch, with his original red hair, would make a pretty good Loki. Tom Hiddleston would make a good Dainn, my elf character … with long black hair, rather like Loki in Avengers or the forthcoming Thor: The Dark World. (But only if you remove the smug, supercilious expression. When he’s pensive, he’s perfect.) The actress Rebecca Romijn (currently in a show called King and Maxwell, formerly in X-Men) or Kristanna Loken (when she’s played a warrior woman, not a Playboy type model.) 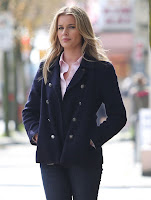 Did you always plan for MIST to be a trilogy?
Yes, but I quickly learned the story arc wanted to be longer. I had to compress it to fit into three books. I have ideas if I ever get a chance to write a fourth book about these characters.

What was the easiest scene to write?  Which was the most difficult?
That’s hard to pin down … I wrote the book quite a while ago!  But generally, the easiest scenes to write were the ones with Loki, because he has no inhibitions. He says and does pretty much whatever he wants, so that gives me a lot of freedom. It’s just plain fun.

The most difficult are actually the magic scenes. I needed to establish my own kind of magic with its own laws, and keeping that fresh and consistent isn’t always easy.

After MIST, what's next for you?
I have two more books in the Midgard Series, Black Ice and Battlestorm, coming out in summer 2014 and 2015. I also have three books in my “Nightsider” series for Silhouette Nocturne, the first being Daysider, out this August. The books are paranormal romance, but I did a great deal of SF/fantasy world building, because that, along with complex characterization, is my chief interest as a writer. The stories are set on a post-apocalyptic earth after a human/vampire war, where peace is a very fragile construct maintained by the laws of an uneasy truce and special troops on each side.

After that, if I don’t get a new contract right away, I’ll be writing my own novels to put out there … urban fantasy, epic fantasy, or historical fantasy. I have plenty of ideas!

Thanks for taking the time to answer our questions, Susan!

Susan Krinard has been writing paranormal romance and fantasy since 1993, when a published author friend read a short story she’d written and advised her to try writing a novel. She sold her first novel to Bantam Dell, and has since written for Bantam, Penguin, Harlequin/ Silhouette, Harper Collins, St. Martin’s Press, and Tor Books. Her output includes twenty-three novels and twelve novellas and short stories.

Susan’s love for Science Fiction and Fantasy began when her fourth grade teacher read Madeleine L’Engles’ A Wrinkle In Time to the class. She attended her first Star Trek convention at the age of 14. Since then she’s continued to read voraciously and has attended numerous local and World Science Fiction conventions. Her first major urban fantasy series is the “Midgard” series, beginning with Mist, a July 2013 release from Tor Books.

Susan and works in Albuquerque, New Mexico, with her husband Serge Mailloux—whom she met because of a mutual love of the works of writer C. J. Cherryh—dogs Cagney, Nahla and Freya, and cats Agatha and Rocky. www.susankrinard.com

Sound interesting?  Want to check out the book for yourself? Well, we've got three chances for you to win!  Thanks to Tor, we've got three copies of Mist to give away, which will come with some pretty nifty bookmarks with artwork of the characters.  The giveaway below is open to anyone with an address in the US or Canada.  Good luck!