By Sarah A. - July 26, 2013
Thanks to author Victoria Simcox, we're pleased to offer an excerpt from her MG/YA fantasy novel The Magic Warble, as well as a international giveaway for an ebook of the story! Keep reading for more! Twelve-year-old Kristina Kingsly feels like the most unpopular girl in her school. The kids all tease her, and she never seems to fit in. But when Kristina receives an unusual Christmas gift, she suddenly finds herself magically transported to the land of Bernovem, home of dwarfs, gnomes, fairies, talking animals and the evil Queen Sentiz. In Bernovem, Kristina not only fits in, she's honored as "the chosen one," the only one who can release the land from Queen Sentiz's control. But it's not as simple as it seems. To save Bernovem, she must place the gift she was given, the famous "Magic Warble," in its final resting place. She must travel through the deep forest, climb a treacherous mountain, and risk capture by the queen's "zelbocks" before she reaches her destination. Guided by her new fairy friends, Clover and Looper and by Prince Werrien, a teenage boy, and an assortment of other characters, Kristina sets off on a perilous journey that not only tests her strength but her heart.

They rolled out their sleeping mats and they lay on them under the bright stars. Kristina couldn’t help but notice that the moon in the sky seemed much different than the moon at home. It was much larger, and its color was a pearly white.

“Where is your mother?”

“She’s imprisoned in the top of a tower.”

“Has anyone tried to rescue her?”

“There have been many attempts, but so far they have all failed. You see, the tower is surrounded by the shark-infested Citnalta Sea. Her room is at the top of the tower and has only one small, barred window.”

“You must really miss her.”

“I used to think that I’d never see her again, but now that the Magic Warble has come, I have hope.”

They gazed up at the moonlit sky, both silent for a while. Then Kristina broke the silence, saying, “Werrien, I was wondering if you could tell me a little more about the Magic Warble?”

Werrien rolled on his side to face her. “When it is put back in its resting place, the spell that has allowed Sentiz to reign as sovereign queen over Bernovem will be lifted—at least, that is what
the believers believe.”

Then keep reading to enter to win one of three ebook copies of the book!  This giveaway is open internationally! 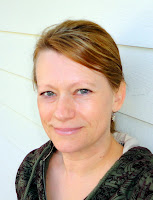 Victoria was born in Scarborough, Ontario, Canada, to an Austrian immigrant mother, and a Dutch immigrant father. She now lives in Western Washington with her husband, Russ and their three children, Toby, Kristina, and William. Her other family members are a Chihuahua, named Pipsy and two cats, named Frodo and Fritz. Besides being an author, Victoria is a home-schooling mother of twelve years and an elementary school art teacher of eleven years. In her spare time, Victoria enjoys managing her two older children's Celtic band. She also loves writing, reading, painting watercolors, hiking, good movies, and just simply hanging out with her family and friends.