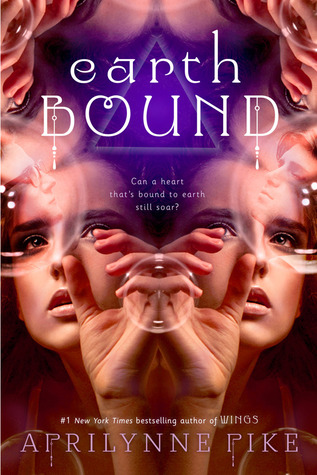 Tavia Michaels is the sole survivor of the plane crash that killed her parents. When she starts to see strange visions of a boy she’s never spoken with in real life, she begins to suspect that there’s much about her past that she isn’t being told. Tavia will soon discover that she’s an Earthbound—someone with the ability to create matter out of nothing—and that she alone holds the key to stopping the Reduciata, an evil society that manipulates global events for its own shadowy purposes. Tavia will ultimately have to make a choice: to come into her powers and save the world from the evil Reduciata or to choose free will and a love of her own.

Earthbound was nothing at all what I expected.  I am not sure why, but between the cover and title I really thought this was a science fiction book- boy was I confused when there was no science fiction in it!  (To note, I picked it up because I ADORE Aprilynne Pike as an author and will read the phone book if she writes it!  I am so glad that it wasn't a science fiction book and that it was fantasy (and historical fantasy?) because that is right up my alley.

Earthbound is full of twists and turns, flipping from historical times to present day with the turn of a page.  The story shines in present day, with the relationship between Bentley and Tavia and also that of Tavia and her family.  Things get a little... rocky when the historical characters' and present day characters' paths meet. Sadly there is an incredibly unbelievable insta-love plot line that drives a chunk of the book.  I found myself groaning through most of those, mostly because it wasn't GOOD insta-love.  Honestly, and oddly, I think that was on purpose because even the main character acknowledges how screwed up it is.  I can't tell you how that resolves because I would ruin the entire book, but it is an ending worth reading.

Earthbound was entertaining, fast-paced, and an excellent start to a new series.  I would suggest this to any fans of any of Aprilynne Pike's other works as well as fans of fantasy with a touch of history.  This was a fun first book and I can't wait for the next one!