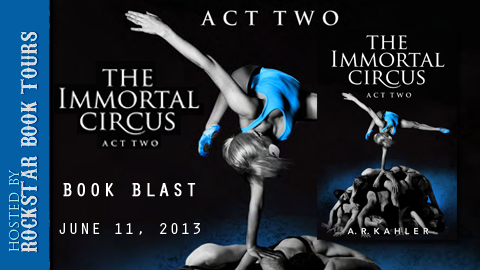 I am so excited to be participating in the book blast to celebrate the release of A.R. Kahler's THE IMMORTAL CIRCUS: ACT TWO today!

Whenever I saw the info for this one, I was like A) YES YES GRABBYHANDS and B) Why haven't I heard of this book before?!?  It looks really awesome, so I am excited to present to you a GUEST POST from Mab, Ringmaster of the Cirque des Immortels, some information about this second book in the series and a couple of awesome giveaways to share, to help spread the word about its release in Kindle serial format.

A few months have passed since we did our last tour, and oh, how I've missed you all.

This week, I am pleased to announce the next installment in our little show. Although it pains me to admit that we will not be doing a full blog tour, I am sure the tale ACT TWO weaves will keep you entertained. So many of you were dying to know more about Vivienne's past. In fact, many people seem to be dying when it comes to Vivienne's past but...I'd hate to spoil her surprise. Needless to say, this will be a show she will never forget.

And for those of you who need more than pretty words to tempt them, I am also hosting a giveaway. Five winners will receive Immortal Circus trading cards and a signed bookplate. One lucky winner will also get a signed copy of book one. 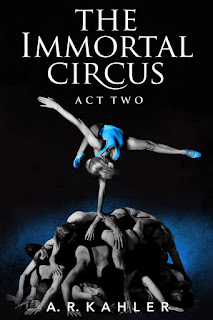 Vivienne is almost content with her new life in the Cirque des Immortels. She has moved up from selling cotton candy to telling fortunes, she has a gorgeous, magical boyfriend, Kingston…and no one has been murdered since the clash between the otherworldly Courts. Her life under the faerie big top would be perfect, in fact, if not for the nightmares and visions that compel her to seek and confront her half-remembered past. But for Viv, not knowing her past may well be a blessing. There's a reason she ran away. But can she truly escape herself? 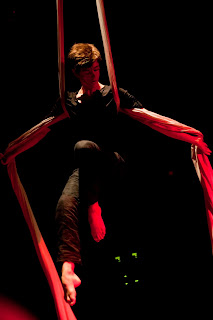 Most little boys dream of running away to join the circus.

Alex didn't just dream it: he did it. But then, he rarely lets a good dream pass him by.

In the past six years he's toured and trained across America and Europe. He's performed in Amsterdam, taught trapeze in Madrid, studied in Glasgow and even had a stint as assistant to Holly Black and Cassandra Clare in New England. He's constantly on the lookout for new places to explore and new worlds to invent. He's a Sagittarius fueled by full moons and espresso. The way to his heart is a latte and fan art. Just for the record.

MARTYR, the first book in his post-apocalyptic YA fantasy series, THE HUNTED, is set to be published October 28, 2014 by Spencer Hill Press. 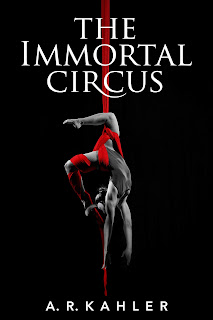 Murdered contortionists aren’t exactly what Vivienne signed up for when she ran away to join the circus. But like most things under the big top, nothing is what it seems. With a past she can't quite remember, Vivienne finds that running away forever might not be as appealing as it once sounded—especially not when she realizes the devilishly attractive ringleader Mab is the Faerie Queen of legend…and that she and the rest of the troupe are locked in an age-old rivalry between the otherworldly Courts.

Aided by her friends Kingston—a feisty stage magician whose magic is quickly stealing her heart—and his smart-ass assistant Melody, Vivienne finds herself racing against the clock to discover the culprit behind a series of deaths that should be impossible. However, the answer she seeks might reveal more about her own bloody past—and future—than she bargains for.


Mab’s Giveaways (US ONLY):

GRAND PRIZE – A signed copy of book one, THE IMMORTAL CIRCUS, The Immortal Circus trading cards and a signed bookplate. (ONE WINNER)

(All winners will be announced in the Rafflecopter and contacted by email.)