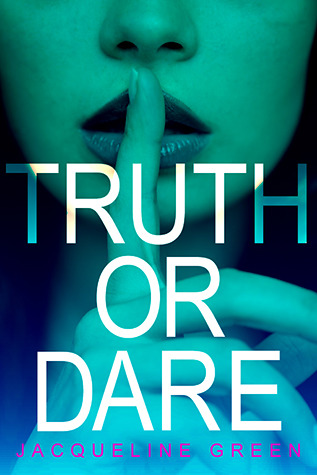 By Jacqueline Green
Published on May 14th, 2013
Published by Little Brown
Source: Publisher for Review

When a simple round of truth or dare spins out of control, three girls find it’s no longer a party game. It’s do or die.

It all started on a whim: the game was a way for Tenley Reed to reclaim her popularity, a chance for perfect Caitlin “Angel” Thomas to prove she’s more than her Harvard application. Loner Sydney Morgan wasn’t even there; she was hiding behind her camera like usual. But when all three start receiving mysterious dares long after the party has ended, they’re forced to play along—or risk exposing their darkest secrets.

How far will Tenley, Caitlin and Sydney go to keep the truth from surfacing? And who’s behind this twisted game?

Set against the backdrop of Echo Bay, an isolated beach town haunted by misfortune, Truth or Dare is a highly charged debut that will keep readers in suspense from beginning to end.


Truth or Dare is a captivating and suspenseful book.  The story surrounds three girls, Caitlin, Tenley, and Sydney- two "haves" and a "have not" from the same coastal town.  The girls are all forced to play along an incredibly dangerous game of truth or dare.  The girls don't know who is directing the game, but whoever has control of the game is making very real and pretty awful threats to the girls.

I enjoyed the characters, the setting, the voice, the pacing- this was a pretty solid book for me.  I found the "killer" to be pretty predictable, but it didn't lessen the enjoyment for me.  I know that others have compared this book to the Pretty Little Liars series.  I can't weigh in on that because I haven't watched the show or read any of the books.  I do know, though, that it seems like it follows a pretty similar track to what I know of the series.  (I am not saying that it copies the series, but fans of the series will find something familiar in this book.)

The book is left at the end with a bit of the hook, and not everything about the killer was explained.  That was probably the only downside I had to this book- I was left with a ton of questions.  I am assuming this is the start of a series, based on the way it ended.  All in all, it was an enjoyable book and fans of mysteries or suspenseful contemporary stories will enjoy this one.