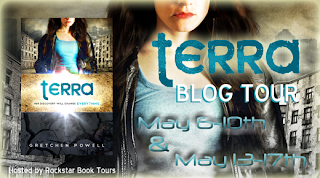 Thanks to Rockstar Book Tours, we're bringing you a guest post by Gretchen Powell, author of Terra, and an awesome giveaway! Keep reading for more information, and make sure to visit the other stops on the tour for more excerpts, interviews, and reviews! A broken and desolate Earth. A young girl struggling to survive. A lost boy with a powerful secret.

A discovery that will change everything.

In the distant wake of a plague that has decimated the Earth's population, humanity is split in two: The rich and powerful live in skycities that float overhead, while those who remain on the ground have gathered in settlements strewn across a dying planet. Eighteen-year-old Terra Rhodon is a terrestrial--a denizen of the barren groundworld--who makes her living as a scav. Long abandoned by her father, her caregivers gone, Terra supports herself and her younger brother, Mica, by scouring the earth for discarded scraps and metals to recycle for profit. One day, while on a routine scavenging run, she discovers something that shocks her home settlement of Genesis X-16. When the value of her discovery is revealed, Terra's world is turned upside down.

Terra suddenly finds herself asking questions no one will answer. Her search for the truth leads her to Adam--a beguiling skydweller unlike any she has ever met. But Adam has secrets and a quest of his own, and with him by her side, the world Terra thought she knew begins to unravel. Soon her discoveries unearth a terrifying conspiracy that has the potential to shatter everything--a revelation that will test the bonds of loyalty, family, and love.

Chapters 1 & 2 are available to read online!


What was your inspiration for TERRA?
I read far more than my fair share of dystopian fiction, so I figured it was only natural that I write something in the same genre. You know, go by the whole "write the book you'd want to read" mantra and all. I guess my main inspiration was a conversation I had with my brother. You know, the kind of "So... I have this idea... I think it would make kind of a cool book..." kinda thing. And that idea really transformed and became something entirely new and different once I actually started writing.

What kind of research did you have to do for the world-building for the story?
I did have to do a little bit of research to determine what might be realistic in terms of technological advancements and environmental degradation and stuff, based on what kind of technology and whatnot we have going on already. But it wasn't really that much, since I figured there is always a suspension of disbelief when it comes to fiction, and I can kind of run with ideas that might not actually be feasible in reality. I mean, heck, that's why fiction is so much fun, right? I also kind of consulted with my brother-in-law (who is a doctor) to determine the physical impact and effects of... a-hem... a certain event that happens towards the end of the book. (No spoilers!)

Tell us about your writing process (favorite place to write, anything you HAVE to have, yes or no to music, etc.)
I can't really say specifically what my writing process is like, because it changes every single time! Sometimes I am laying on my bed, sometimes it's at my desk, sometimes it's in a crowded coffee shop. I think the constant changing up of things is what helps keep me inspired, actually. I will say that generally, though, my writing inspiration tends to come at night (in the middle of the night, really, which is quite inconvenient to my work schedule, haha) and the one thing that doesn't change is that I CANNOT listen to music. I've tried so many times, cause you hear about all these awesome stories of specific songs or playlists that authors used, but I just can't listen to any music at all. I end up trying to actually listen to the music too much!

If you can tell us without spoilers, what was your favorite scene to write? What was the most challenging?
My absolute favorite scene (well, scenes, really) come toward the end of the book. You'll know them when you get to them, because they're some of the most action-packed and adrenaline-pumping scenes in the whole book! I find that writing action is really what excites and motivates me. Conversely, all of my most challenging scenes came in the in-between parts. Trying to link together significant action-driven or character-developing scenes with the little filler bits was definitely the hardest part for me. Usually, I'd just end up skipping ahead to the next exciting part and then just trying to fill in the gap later on.

In honor of our blog's name (The Best Books Ever), tell us: what's the one book that you would recommend that everyone move to the top of their to-read piles (other than TERRA, of course!).
I love this question! Well, I imagine that if your blog readers devour books as voraciously as I imagine they probably do, many of them have already read this book. That said, it is still far and wide the BEST book that I have read in the last few months: The Fault in Our Stars by John Green. That book absolutely DESTROYED me in the best possible way. Two incredibly enthusiastic thumbs up... I kinda want to read it again now. 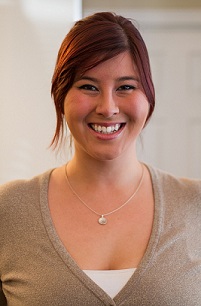 Half-Chinese and the daughter of a US diplomat, Gretchen Powell spent her childhood growing up in far-off places. She made it all the way to her mid-twenties whilst maintaining her deep-seated love for young adult novels, so she decided to write one of her own.

Her creative process involves copious amounts of Sour Patch Kids and sleeping fitfully. Her many interests include anything with polka dots, Harry Potter, and playing the ukulele.

She lives in Northern Virginia with her two adorable miniature schnauzers. They wear many sweaters.