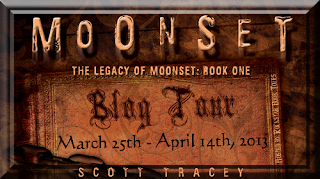 Thanks to Rockstar Book Tours, we're bringing you a guest post by Scott Tracey, author of Moonset, and an awesome giveaway! Keep reading for more information, and make sure to visit the other stops on the tour for more excerpts, interviews, and reviews! Moonset, a coven of such promise . . . Until they turned to the darkness.

After the terrorist witch coven known as Moonset was destroyed fifteen years ago—during a secret war against the witch Congress—five children were left behind, saddled with a legacy of darkness. Sixteen-year-old Justin Daggett, son of a powerful Moonset warlock, has been raised alongside the other orphans by the witch Congress, who fear the children will one day continue the destruction their parents started.

A deadly assault by a wraith, claiming to work for Moonset’s most dangerous disciple, Cullen Bridger, forces the five teens to be evacuated to Carrow Mill. But when dark magic wreaks havoc in their new hometown, Justin and his siblings are immediately suspected. Justin sets out to discover if someone is trying to frame the Moonset orphans . . . or if Bridger has finally come out of hiding to reclaim the legacy of Moonset. He learns there are secrets in Carrow Mill connected to Moonset’s origins, and keeping the orphans safe isn’t the only reason the Congress relocated them . . .

We asked Scott: Who was your favorite character to write in Moonset and why?

His answer: Oh jeez, this is an interesting question. I went through different stages where I would have one favorite or another. I actually like all of the characters in different ways, but looking back on it, I would have to say that Ash is one of my favorites. Well, actually Cole. No, it should probably be Justin....but then there's Jenna....

Huh. This is difficult. I'll probably go with Justin, just because I think he had the most obvious journey throughout the book. I like that he ended up growing as a result of what happened in the novel, and that there was a lot he had to come to terms with. The book is definitely about Justin's journey, and so he got the most mileage out of what was going on in the book.

Justin's a self-sacrificer, the middle sibling who puts the others ahead of himself. He tries to solve problems which sometimes only makes the problems worse (especially when two of his siblings are fighting).

He's not always the most astute person, either. I like that Justin doesn't always realize what's really going on around him, and doesn't see some of the things coming that he should have. It makes it interesting (for me) because Justin gets to perceive certain characters one way, when in actuality they're very different from his impression. Because for all his impartiality when it comes to his family, Justin can tend to be a fairly judgmental person and react based on first impressions.

I also like that there's a hint of moral ambiguity to Justin. He knows there's a difference between right and wrong, but he still struggles with what he wants, versus what he SHOULD want. Because honestly, if you were a good-hearted teenager and someone told you that you could be a witch and have the ability to cast spells, almost EVERYONE would be tempted to use those powers for evil, just a little bit. Just to right some wrongs, just to get a little payback. Not "take over the world" evil, but definitely a dark morally gray. But that's where the path to real evil begins, which is also something that Justin gets to learn about first hand. 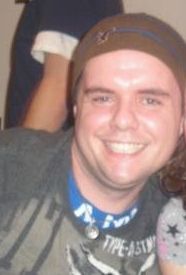 Scott Tracey is a YA author who lived on a Greyhound for a month, wrote his illustrated autobiography at the age of six, and barely survived Catholic school (and definitely not for the reasons you might think).

He is the author of WITCH EYES, chosen as one of Amazon’s Best LGBT Books of 2011, as well as an ALA Popular Paperback in the Forbidden Romance category.  The final book in the WITCH EYES trilogy, PHANTOM EYES, will be released in the fall of 2013.

He is also the author of MOONSET, a new series which will be released April 8, 2013, as well as a contributor to the SHADOWHUNTERS & DOWNWORLDERS anthology, edited by Cassandra Clare.

His career highlights include: accidentally tripping a panic alarm which led to nearly being shot by the police; attacked in a drive-thru window by a woman wielding a baked potato, and once moving cross country for a job only to quit on the second day.

His gifts can be used for good or evil, but rather than picking a side, he strives for BOTH (in alternating capacity) for his own amusement.