Doon, by Carey Corp and Lorie Langdon, had its big cover reveal.  Did you see it?  It's really pretty.

What, you missed it?  Well, here's your second chance to check it out... 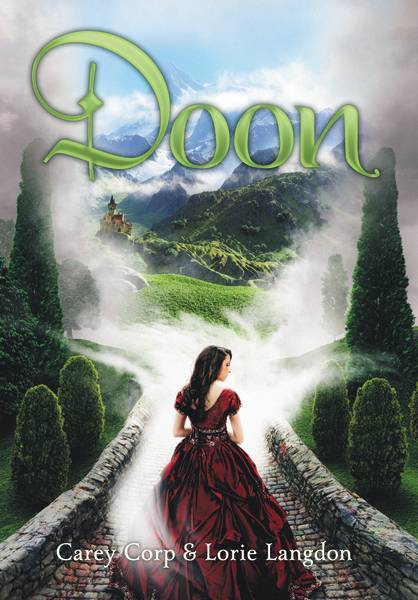 Isn't it great?  I love the colors, the rolling mists, the whole thing!

Doon is scheduled to come out in August, and I hope you're adding it to your to-read lists right now.

Veronica doesn't think she's going crazy. But why can't anyone else see the mysterious blond boy who keeps popping up wherever she goes? When her best friend, Mackenna, invites her to spend the summer in Scotland, Veronica jumps at the opportunity to leave her complicated life behind for a few months.

But the Scottish countryside holds other plans.

Not only has the imaginary kilted boy followed her to Alloway, she and Mackenna uncover a strange set of rings and a very unnerving letter from Mackenna's great aunt—and when the girls test the instructions Aunt Gracie left behind, they find themselves transported to a land that defies explanation. Doon seems like a real-life fairy tale, complete with one prince who has eyes for Mackenna and another who looks suspiciously like the boy from Veronica's daydreams. But Doon has a dark underbelly as well. The two girls could have everything they've longed for...or they could end up breaking an enchantment and find themselves trapped in a world that has become a nightmare.

If you want a chance to read Doon early, make sure you enter the giveaway at YA Books Central for a signed ARC!