2nd Anniversary Celebration: Get to know Sarah and WIN THE ELITE! 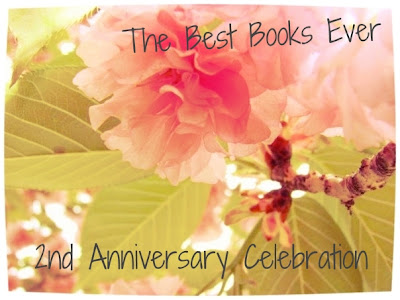 Today we are getting to know a little bit more about our resident zombie-lover- Sarah:


If you could only read three books for the rest of your life- what would they be?

Tell us about your feline friends! (Pictures please!)


I adopted Spats in April 2011.  He's a black and white tuxedo cat with some anger management issues, especially when he thinks he's not getting enough attention.  He is my first cat (I grew up with dogs), and when I went to the shelter to peruse their cats, I wasn't really sure what I was looking for, other than a laid back sort of cat (aka 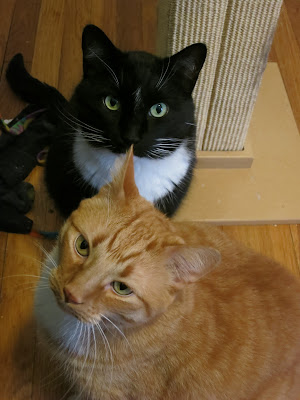 not a kitten).  When they introduced me to Spats, they told me to pick him up, which I thought was kind of odd, thinking that most cats don't like that sort of stuff.  But I did and it turns out he gives the best kitty hugs! He puts his little paws around your neck and snuggles with you.  Lately, he's taken to sleeping on top of me at night, or, alternatively curls up next to my head and steals 80% of my pillow.  He also tried grooming my hair the other night, which was.... fun.

My second cat, Chumley, was adopted in October 2012.  I'd been wanting a second cat to keep Spats company, but I was planning on waiting until after November (I was volunteering a pretty substantial amount of time with a major political campaign). But I happened to stop by my local pet supply store when a local shelter was showing off some adoptable cats, and after telling the shelter's volunteer that I have a soft spot for large cats, she showed me Chumley, who is a 20-pound orange tabby, and it was love at first purr.  He has blossomed into an incredibly odd, neurotic cat: he tries to eat the handles of plastic bags, has chewed through a bra strap, and eats his meals so quickly you'd think he hasn't been fed in ages.  But he's also an excellent snuggler/pillow/hand warmer and hilarious to watch when he's playing with his favorite toys.


How do you like to read? Do you have a special reading place in your house? Do you munch while reading? Do you read multiple books at a time? Do you read the ending first?


I've always wanted a reading nook, and I hope that I'll be able to accomplish that in my next home.  Mostly when I read at home, I'm curled up on the couch or in bed, until one or both cats come and stand on the book or the Kindle to stop me.  I really do most of my reading while on the train or bus commuting around the city, however, so there's not usually a lot of comfort involved.  I used to munch while I eat but now I have one fat orange cat who will try to eat the food instead, so that's off limits.  I am usually reading two or three books at a time -- I'm usually reading one book for a book tour (so something I have an actual deadline to finish) and one just for fun.  And sometimes at breaks or over lunch at work, I'll read PDFs or other files from Netgalley which can only be read on a computer, not on my Kindle.  I never read the ending first, but if there's a book which is starting to feel really predictable, sometimes I'll skip ahead to read the last few paragraphs to see if my guess is right.  (Also, if it's a book I'm not really enjoying, I'll also read the ending just to see in advance how annoyed I'll be.)

What is one stereotype that is way overused in YA fiction?  What is something you don't see enough of in the books you read?

Hmm... there are a lot of overused stereotypes, but I'm going to go with the idea of "bad boys who are bad except for our leading lady".  Think Noah from the Mara Dyer books, or what's his name from Pushing the Limits.  Guys who really are total jerks except that they've got a heart of gold because they're sooo in loooove.  It's a nice idea in theory and lots of girls (and women) dream of changing their bad boy into someone they can take home to mama, but that's rarely how it works in the real world and I think sometimes it sends a dangerous message to readers.  Chances are if a guy's got a violent, nasty streak -- if he's a player, if he's hit other women, if he's controlling of our leading lady -- it's not going to go away just because he suddenly falls in instalove.

Something I don't seen enough of... strong female friendship.  For better or worse, a lot of YA books cater to girls, but no matter the genre, romantic relationships are almost always the focus.  There's a thing in feminist theory/media analysis called the Bechdel Test: basically, a piece of media passes this test if there are more than two woman characters who talk to each other about something other than a man.  There's a disappointing amount of YA lit which would fail this test miserably, or only pass by the barest of margins.  I always bring it up as an example, but I want more books like Code Name Verity, where the focus is on the power of friendship, rather than girls trying to get a man.  Romance certainly has its place and I certainly enjoy a good love story, but sometimes I just want less books about love with a side helping of mean girls and more about girls working together and learning about themselves in the process. 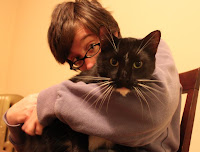 Sarah's also a Pennsylvania native and PSU grad who has since relocated to Chicago, one of the least midwest-y cities in the midwest.  She has her MA in Clinical Psychology and currently works in Human Resources, focusing on policy and compliance issues, at a major law firm.  When she isn't reading books, she's maintaining her own music blog (www.howsmyliving.com), hosting a weekly indie-rock-and-also-bluegrass radio show (www.chirpradio.org), or singing in a folk-rock/Americana inspired band (www.jungleofcities.com).  She enjoys dystopian fiction, zombies, peanut butter, and chasing after her cats.

Wanna win this?  Enter below!