Romance is in the Air Giveaway Hop 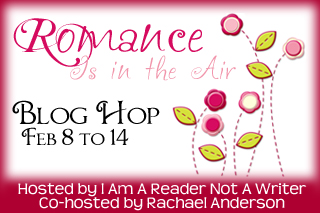 We are giving away : The Tutor's Daughter
By Julie Klassen
Published on January 2013
Published by Bethany House
Emma Smallwood, determined to help her widowed father regain his spirits when his academy fails, agrees to travel with him to the distant Cornwall coast, to the cliff-top manor of a baronet and his four sons. But after they arrive and begin teaching the younger boys, mysterious things begin to happen and danger mounts. Who does Emma hear playing the pianoforte, only to find the music room empty? Who sneaks into her room at night? Who rips a page from her journal, only to return it with a chilling illustration? The baronet's older sons, Phillip and Henry, wrestle with problems--and secrets--of their own. They both remember Emma Smallwood from their days at her father's academy. She had been an awkward, studious girl. But now one of them finds himself unexpectedly drawn to her. When the suspicious acts escalate, can the clever tutor's daughter figure out which brother to blame... and which brother to trust with her heart?


Enter the rafflecopter below to enter!