This year, Coranne and I are happy to take part in the Top 10 of 2012 meme.  There have been a ton of amazing books that have come out this year, or which we've read this year, and so we're spreading our top picks out with a new theme every day.
Today, we're wrapping up our week of posts by sharing the books we're most looking forward to in 2013.  There were some hard choices to be made here -- there are so many great series which I've started and can't wait to read more of!  Be sure to share your favorites in the comments, too. Sybella arrives at the convent’s doorstep half mad with grief and despair. Those that serve Death are only too happy to offer her refuge—but at a price. Naturally skilled in both the arts of death and seduction, the convent views Sybella as one of their most dangerous weapons.

But those assassin’s skills are little comfort when the convent returns her to a life that nearly drove her mad. Her father’s rage and brutality are terrifying, and her brother’s love is equally monstrous. And while Sybella is a weapon of justice wrought by the god of Death himself, He must give her a reason to live. When she discovers an unexpected ally imprisoned in the dungeons, will a daughter of Death find something other than vengeance to live for?

This heart-pounding sequel to Grave Mercy serves betrayal, treachery, and danger in equal measure, bringing readers back to fifteenth century Brittany and will keep them on the edge of their seats. Fourteen-year-old Sophronia is the bane of her mother's existence. Sophronia is more interested in dismantling clocks and climbing trees than proper etiquette at tea--and god forbid anyone see her atrocious curtsy. Mrs. Temminnick is desperate for her daughter to become a proper lady. She enrolls Sophronia in Mademoiselle Geraldine's Finishing Academy for Young Ladies of Quality.

But little do Sophronia or her mother know that this is a school where ingenious young girls learn to finish, all right--but it's a different kind of finishing. Mademoiselle Geraldine's certainly trains young ladies in the finer arts of dance, dress, and etiquette, but also in the other kinds of finishing: the fine arts of death, diversion, deceit, espionage, and the modern weaponries. Sophronia and her friends are going to have a rousing first year at school.

First in a four book YA series set 25 years before the Parasol Protectorate but in the same universe. The Eternity Cure
By Julie Kagawa
Published on April 23, 2013
Published by Harlequin Teen

Allison Sekemoto has vowed to rescue her creator, Kanin, who is being held hostage and tortured by the psychotic vampire Sarren. The call of blood leads her back to the beginning—New Covington and the Fringe, and a vampire prince who wants her dead yet may become her wary ally.

Even as Allie faces shocking revelations and heartbreak like she’s never known, a new strain of the Red Lung virus that decimated humanity is rising to threaten human and vampire alike. The Glass God
By Kate Griffin
Published on July 9, 2013
Published by Orbit

This book is so not close to being released that it doesn't even have a summary yet. But it's the second book in Griffin's Magicals Anonymous series, which debuted in 2012 with Stray Souls. It's set in the same universe as her Matthew Swift stories, and while I miss Swift being the focus of the story, I'm excited to see where else this universe goes.

The Archived
By Victoria Schwab
Published on January 22, 2013
Published by Hyperion

Imagine a place where the dead rest on shelves like books.

Each body has a story to tell, a life seen in pictures that only Librarians can read. The dead are called Histories, and the vast realm in which they rest is the Archive.

Da first brought Mackenzie Bishop here four years ago, when she was twelve years old, frightened but determined to prove herself. Now Da is dead, and Mac has grown into what he once was, a ruthless Keeper, tasked with stopping often-violent Histories from waking up and getting out. Because of her job, she lies to the people she loves, and she knows fear for what it is: a useful tool for staying alive.

Being a Keeper isn't just dangerous-it's a constant reminder of those Mac has lost. Da's death was hard enough, but now her little brother is gone too. Mac starts to wonder about the boundary between living and dying, sleeping and waking. In the Archive, the dead must never be disturbed. And yet, someone is deliberately altering Histories, erasing essential chapters. Unless Mac can piece together what remains, the Archive itself might crumble and fall.

In this haunting, richly imagined novel, Victoria Schwab reveals the thin lines between past and present, love and pain, trust and deceit, unbearable loss and hard-won redemption.

After accidentally unleashing the gods from their captivity on Olympus, Helen must find a way to re-imprison them without starting a devastating war. But the gods are angry, and their thirst for blood already has a body count. To make matters worse, the Oracle reveals that a diabolical Tyrant is lurking among them, which drives a wedge between the once-solid group of friends. As the gods use the Scions against one another, Lucas’s life hangs in the balance. Still unsure whether she loves him or Orion, Helen is forced to make a terrifying decision, for war is coming to her shores. Darkness never dies. Hunted across the True Sea, haunted by the lives she took on the Fold, Alina must try to make a life with Mal in an unfamiliar land, all while keeping her identity as the Sun Summoner a secret. But she can't outrun her past or her destiny for long. The Darkling has emerged from the Shadow Fold with a terrifying new power and a dangerous plan that will test the very boundaries of the natural world. With the help of a notorious privateer, Alina returns to the country she abandoned, determined to fight the forces gathering against Ravka. But as her power grows, Alina slips deeper into the Darkling's game of forbidden magic, and farther away from Mal. Somehow, she will have to choose between her country, her power, and the love she always thought would guide her--or risk losing everything to the oncoming storm. Thirty-five girls came to the palace to compete in the Selection. All but six have been sent home. And only one will get to marry Prince Maxon and be crowned princess of Illea. America still isn’t sure where her heart lies. When she’s with Maxon, she’s swept up in their new and breathless romance, and can’t dream of being with anyone else. But whenever she sees Aspen standing guard around the palace, and is overcome with memories of the life they planned to share. With the group narrowed down to the Elite, the other girls are even more determined to win Maxon over—and time is running out for America to decide. Just when America is sure she’s made her choice, a devastating loss makes her question everything again. And while she’s struggling to imagine her future, the violent rebels that are determined to overthrow the monarchy are growing stronger and their plans could destroy her chance at any kind of happy ending Danger intensifies for the Shadowhunters as the New York Times bestselling Infernal Devices trilogy comes to a close. If the only way to save the world was to destroy what you loved most, would you do it? The clock is ticking. Everyone must choose. Passion. Power. Secrets. Enchantment. Danger closes in around the Shadowhunters in the final installment of the bestselling Infernal Devices trilogy

Shockingly, I am not a fan of the Mortal Instruments series. (Please don't throw tomatoes). I thought the first three books were decent, but then I thought the series jumped the shark at book four. This series, though, I ADORE! 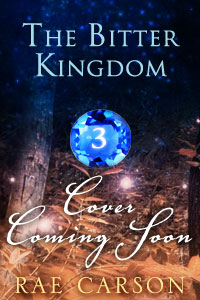 This one is so far out there is no synopsis up yet (and I don't want to ruin the second book by giving you spoilers!) This is the third book after The Girl of Fire and Thorns and also The Crown of Embers.