This week on Best Book Ever, I wanted to talk about bad guys.  I don't know about you, but I've got a soft spot for villains and bad boys and whoever it is that we're not supposed to be rooting for (but maybe secretly are anyway).  Here are some of our favorite baddies! (Don't worry, the good guys will get their turn soon!)

It's shockingly easy to like the bad guys... when they're fictional it's also safe. I've got a double pick from the same author - and I expect to be flamed for saying I have moments of compassion for either of these fellas. Black Jack Randall from Diana Gabaldon's OUTLANDER series is a sadist, and an asshole and... well he's just really mean. And Gabaldon gives him moments in the subsequent titles of the series where we see him mourning over the death of his little brother, sharing his own helplessness in the face of his (though sadistically-tinged) love for Jamie, and I have to think... aww.... I mean who wouldn't feel completely overwhelmed by their love for Jamie Fraser?

My second pick is Black Jack's mirror image - Frank Randall, Claire's husband that she left behind when she accidentally time traveled through the stones. When she returns, he tries to love her the same as he did when she left even though she's carrying a stranger's child and will not tell him what happened during the years of her absence. And when she *finally does* he has to live with the fact that (even if he refuses to believe it) his wife is desperately in love with another man. Yes, he has affairs. And yes, that's not cool. But dude... unrequited love in a marriage? My heart breaks for Frank.

Mindy McGinnis, debut author of Not A Drop To Drink (2013, Katherine Tegen)

My favorite villain. That's tough. The Joker from pretty much any Batman graphic novel. Mrs. Danvers/Rebecca from REBECCA. Cersei from Martin's A Song of Ice And Fire. The mother/grandmother from FLOWERS IN THE ATTIC. All top contenders. But...

The Grand Prize Winner:
The Overlook Hotel in the THE SHINING. I once stayed at the Stanley Hotel in Colorado, during a blizzard. And so I intimately understand how it could have inspired Stephen King to write a book where the real villain is not the main character, Jack, but the silent, ominous hotel where's he trapped for the winter...with only himself, his personal demons, and a whole lot of menacing ghosts. Genius, King. Pure genius.

April Tucholke, debut author of Between the Devil and the Deep Blue Sea (2013, Dial/Penguin)

Perhaps my favorite villains in all of literature are the witches from Roald Dahl's THE WITCHES. They're just the right mix of scary and disgusting and hilarious to be infinitely entertaining. They are bald and must wear wigs at all time, resulting in flaky, itchy scalps covered in welts. Their spit is blue. They have claws instead of fingernails, and they have no toes at all—their feet are squared off at the ends like they've been chopped off with a meat cleaver. (I always found this part particularly disturbing.) But perhaps the scariest thing about the witches is that when their disguises are in place, they look just like regular women. Anyone could be a witch, and you'd never know... until they come for you. And if you're a child—the thing all witches hate more than anything in the world—you can't even hide from them, because they can smell you. *shudder* Although the witches are obviously the bad guys, they're so horribly awesome that you almost find yourself rooting for them instead of the hero. That is, until they turn you into a mouse. 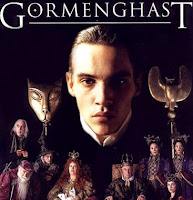 I was in danger of overthinking this one, so I decided to go with my first instinct: Steerpike from Mervyn Peake's Gormenghast series. I have to admit to only having read the first book in the fantasy trilogy, Titus Groan, but I was impressed by how cunning and manipulative Steerpike is, a young man rising from a lowly rank in the kitchens to supreme political power. He's charming, clever, evil, and opportunistic, and in the BBC television adaptation, he's also hot: played by Jonathan Rhys Meyers. Plus, that's just an awesome name for your anti-hero, or a puppy. It's a tricky thing making your protagonist evil, but Peake pulled it off. My theory is that the best villains are either somewhat sympathetic and ultimately achieve redemption, or they get what's coming to them. Either way, it's always satisfying, and with Steerpike, half the time you're rooting for him, and the rest of the time you're waiting for him to be exposed and punished. I'm bumping up the next two books in my TBR pile, and scheduling a re-watch of the TV show.

For me, a great villain lives long in your head long after you’ve turned the last page. He’s difficult to forget and hard to ignore. The fact that I’m picking one who’s also a fluffy bunny rabbit might be kind of strange, but if you’ve ever read Watership Down by Richard Adams, you might get why I’m picking General Woundwort as a pretty awesome villain. Despite being an animal that sports cute ears and an even cuter tail, he’s a brutal character who terrorizes his way through the good guys, cutting them down and doing his ultimate best to defeat them. There is no doubt in your mind that he is out to win, regardless of how far he has to go. Yet like all great villains, Woundwort is far from one-dimensional, making him all the more real, relatable and therefore human—or rabbit, in this case! 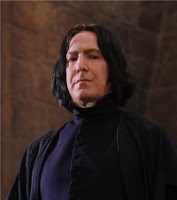 My favorite villain is one who turned out not to be a villain at all (spoiler alert!) Professor Snape was such a fun character- one who seemed to relish torturing Harry and his friends all throughout school. As the series developed and we learned more about Snape and how he was treated, it really gave Snape's character a completeness. I remember crying in the last book when Snape was killed, and Harry realized how many mistakes he made in judging the man.
- Coranne

So Coranne sent me her Snape blurb and I sat at my desk, shaking my fist, going noooooooo, because I was finally going to pick Harry Potter for something, and she beat me to it.  Snape was always one of my favorite characters in Harry Potter, even when he spent many, many books being cast as the obvious bad guy.  He's a character with a lot of layers that are slowly peeled away over the course of the books.
My Potter-choice taken, I went for my other favorite baddie: Melisande Shahrizai of Jacqueline Carey's Kushiel's Legacy series.  She's definitely the kind of villain you love to hate, and that's just how Phedre feels about her, too.  Melisande is beautiful and brilliant ... and also devious and manipulative.  She takes what she wants, and she doesn't care who gets in her way, or who she has to destroy to get it.  Melisande and her actions cast a long shadow over the series, and her influence is felt even in books where she has a minor presence.

What about you? Who is your favorite villain?