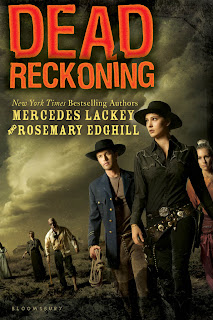 Jett is a girl disguised as a boy, living as a gambler in the old West as she searches for her long-lost brother. Honoria Gibbons is a smart, self-sufficient young woman who also happens to be a fabulous inventor. Both young women travel the prairie alone – until they are brought together by a zombie invasion! As Jett and Honoria investigate, they soon learn that these zombies aren’t rising from the dead of their own accord … but who would want an undead army? And why? This gunslinging, hair-raising, zombie western mashup is perfect for fans of Cowboys vs. Aliens and Pride & Prejudice & Zombies.

Dead Reckoning is a novel that manages to combine several interesting genres into one story: zombies, westerns, and steampunk, all set against the backdrop of the post-Civil War US.  Amazingly, no one aspect of this totally overwhelms the others.  It truly is a steampunk zombie western, rather than just a zombie story with a few hints of the wild west.

The story is easy to get into and is mostly well-paced, although there were a few spots where things seemed to drag.  The three main characters -- Jett, White Fox, and Gibbons -- are relatively well defined, even if they do seem like contemporary YA stereotypes.  Jett is a girl posing as a boy, with plenty of attitude and smarts.  White Fox has a mysterious past and is the strong, silent type.  Gibbons is a scientist who doesn't behave like your traditional young woman in the 1860s.  There are the tiniest hints of romantic possibilities, but this story is in no way a love triangle, or even an unrequited-crush triangle.  Despite the fact that you can find similar characters in any number of YA books, the three of them still make a quirky trio whose exploits are easy to get invested in.  Each of the three have their own secrets, and bits of backstory are sprinkled throughout the story.

There are some genuinely tense moments in the story which will keep you at the edge of your seat.  There are also some emotional moments, as well as a good share of humor, mostly due to the snark and banter between Jett and Gibbons.  Both of them are ladies doing the unexpected in the 1800s, with neither fitting into the expected roles for women, which might be why they butt heads sometimes.

Authors Mercedes Lackey and Rosemary Edghill are both better known for their more mature sci-fi/fantasy novels.  They've written together before, and it shows, as the prose is seamless.  Some co-written books have obvious changes between the voices of each author, but Dead Reckoning reads like it was written by one person.  Aside from the zombies, there are several deaths in the book (which are not described in great detail), and a fair bit of violence, including violence against women.  Dead Reckoning seems to set itself up for a sequel, leaving just enough loose ends that a series could take shape, but not enough that you're not satisfied by the ending.