Showing posts from April, 2012
Show all

Kill Me Softly By Sarah Cross Published by EgmontUSA Published on April 10, 2012 Summary taken from Goodreads : Mirabelle's past is shrouded in secrecy, from her parents' tragic deaths to her guardians' half-truths about why she can't return to her birthplace, Beau Rivage. Desperate to see the town, Mira runs away a week before her sixteenth birthday—and discovers a world she never could have imagined. In Beau Rivage, nothing is what it seems—the strangely pale girl with a morbid interest in apples, the obnoxious playboy who's a beast to everyone he meets, and the chivalrous guy who has a thing for damsels in distress. Here, fairy tales come to life, curses are awakened, and ancient stories are played out again and again. But fairy tales aren't pretty things, and they don't always end in happily ever after. Mira has a role to play, a fairy tale destiny to embrace or resist. As she struggles to take control of her fa
Read more

Song of My Heart

Song of My Heart By Kim Vogel Sawyer Published on February 2012 Published by Bethany House Source: From Publisher for Review Summary taken from Goodreads : Sadie Wagner has always been devoted to her family. So when her stepfather is injured and can't work, she decides to leave home and accept a position as a clerk at the mercantile in Goldtree, Kansas. Goldtree also offers the opportunity to use her God-given singing talent—though the promised opera house is far different from what she imagined. With her family needing every cent she can provide, Sadie will do anything to keep her job. Thad McKane comes to Goldtree at the request of the town council. The town has been plagued by bootlegging operations, and Thad believes he can find the culprit. After he earns enough money doing sheriff work, he wants to use it to pay for his training to become a minister. Thad is immediately attracted to the beautiful singer who performs in Asa Baxte
Read more

The Strange Case of Finley Jayne By Kady Cross Published by Harlequin Teen Published on May 2011 Source: Free from Kobo Summary taken from Goodreads : Finley Jayne knows she's not 'normal'. Normal girls don't lose time, or have something inside them that makes them capable of remarkably violent things. Her behavior has already cost her one job, so when she's offered the lofty position of companion to Phoebe, a debutante recently engaged to Lord Vincent, she accepts, despite having no experience. Lord Vincent is a man of science with his automatons and inventions, but Finley is suspicious of his motives where Phoebe is concerned. She will do anything to protect her new friend, but what she discovers is even more monstrous than anything she could have imagined... An ebook exclusive prequel to The Steampunk Chronicles. What a fun story!  I love the Steampunk Chronicles and this was an excellent prequel to the series.  It w
Read more

The Girl in the Clockwork Collar

The Girl in the Clockwork Collar By Kady Cross Published by Harlequin Teen Published on May 22, 2012 Summary taken from Goodreads : In New York City, 1897, life has never been more thrilling - or dangerous. Sixteen-year-old Finley Jayne and her "straynge band of mysfits" have journeyed from London to America to rescue their friend Jasper, hauled off by bounty hunters. But Jasper is in the clutches of a devious former friend demanding a trade-the dangerous device Jasper stole from him...for the life of the girl Jasper loves. One false move from Jasper and the strange clockwork collar around Mei's neck tightens. And tightens. The Cover:  My first thought when I saw this cover is:  WHO IS THIS?  It couldn't be Finley or Emily- they are not Asian.  I was intrigued by the clockwork collar and who this new character could be.  I think the dress is lovely and after reading this book, the model and cover are more true to the actual n
Read more

Grave Mercy By Robin LaFevers Published by Houghton Mifflin Harcourt Published on April 3, 2012 Source: Netgalley Summary taken from Goodreads: Why be the sheep, when you can be the wolf? Seventeen-year-old Ismae escapes from the brutality of an arranged marriage into the sanctuary of the convent of St. Mortain, where the sisters still serve the gods of old. Here she learns that the god of Death Himself has blessed her with dangerous gifts—and a violent destiny. If she chooses to stay at the convent, she will be trained as an assassin and serve as a handmaiden to Death. To claim her new life, she must destroy the lives of others. Ismae's most important assignment takes her straight into the high court of Brittany—where she finds herself woefully under prepared—not only for the deadly games of intrigue and treason, but for the impossible choices she must make. For how can she deliver Death’s vengeance upon a target who, against her will, has stolen her
Read more

Welcome to Best Book Ever!  Each week a group of authors, bloggers, and readers get together to pick their favorite book from that week's topic.   This week, our topic is: Week 22: Best Love Story    For Best Love Story quite a few books came to mind, but in the end I decided to go with Darker Still . It reminded me a bit of Pride & Prejudice only with magic. Awesome, right? There are no love triangles, no weak heroines pining over a guy, & no guys that act like jerks only for the heroine to fall madly in love with him & end up together in the end. I think that's why I chose this one though. Natalie & Denbury's love story is so innocent & sweet. She's a strong main character who wants to help a guy in need & they wind up falling for each other along the way to end up completely in love by the end. Even better? Denbury's a total gentleman! Their love story was just so pure & good that it definite
Read more

The Vanishing Game by Kate Kae Myers Published by Bloomsbury Published on February 14, 2012 Source: from the publisher Review from Goodreads : Seventeen-year-old Jocelyn follows clues apparently from her dead twin, Jack, in and around Seale House, the terrifying foster home where they once lived. With help from childhood friend Noah she begins to uncover the truth about Jack's death and the company that employed him and Noah. Jocelyn's twin brother Jack was the only family she had growing up in a world of foster homes-and now he's dead, and she has nothing. Then she gets a cryptic letter from "Jason December"-the code name her brother used to use when they were children at Seale House, a terrifying foster home that they believed had dark powers. Only one other person knows about Jason December: Noah, Jocelyn's childhood crush and their only real friend among the troubled children at Seale House. But when Jocelyn returns t
Read more 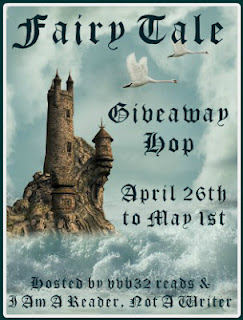 Welcome to Short and Sweet's stop on the Fairy Tale Blog Hop! I love Fairy Tales- especially retellings of fairy tales! My favorite fairy tale of all time is Beauty and the Beast.  I love the magic in it and the slow building romance.  There have been so many great retellings of Beauty and the Beast: The Merchant's Daughter, Beauty, Beastly, Rose Daughter, Beast, and Spirited. Today we are giving away one Paperback copy of Beauty by Robin McKinley.   A strange imprisonment... Beauty has never liked her nickname. She is thin and awkward; it is her two sisters who are the beautiful ones. But what she lacks in looks, she can perhaps make up for in courage. When her father comes home with the tale of an enchanted castle in the forest and the terrible promise he had to make to the Beast who lives there, Beauty knows she must go to the castle, a prisoner of her own free will. Her father protests that he will not let her go, but she answers, "
Read more

Welcome to Short and Sweet's Stop on the Meeting Destiny tour!  Today, the author is hanging out on our blog and sharing her picks for a dream movie casting of Meeting Destiny!   Lauren is visited in her dreams for years by a stranger claiming to be her destiny. Destiny becomes reality when paths cross during a failed robbery attempt. Lauren and the stranger experience chemistry like no other and now her doubt over her long time relationship with her high school sweetheart is not her only secret…someone else knows about her keen intuition and sixth sense.A mysterious clairvoyant seeks Lauren out and tells her not only of her life now but what the future may hold. Soon Lauren is in the middle of a murder investigation and a questionable friendship with the key suspect. Law enforcement, friends and family are concerned for Lauren but unfortunately they are unaware of the true danger…Sinister forces are at work and will stop at nothing to destr
Read more

The Immortal Rules (Blood of Eden #1) By Julie Kagawa Published by Harlequin Teen Published on April 24, 2012 Source: Netgalley   Review from Goodreads :  In a future world, Vampires reign. Humans are blood cattle. And one girl will search for the key to save humanity. Allison Sekemoto survives in the Fringe, the outermost circle of a vampire city. By day, she and her crew scavenge for food. By night, any one of them could be eaten. Some days, all that drives Allie is her hatred of  them.  The vampires who keep humans as blood cattle. Until the night Allie herself is attacked—and given the ultimate choice. Die… or become one of the monsters. Faced with her own mortality, Allie becomes what she despises most. To survive, she must learn the rules of being immortal, including the most important: go long enough without human blood, and you will go mad. Then Allie is forced to flee into the unknown, outside her city walls. There she joins a ragged band of
Read more

Destined By Aprillynne Pike Published by Harper Teen Published on May 2012 Summary taken from Goodreads : Laurel now knows the truth: Yuki is a rare Winter faerie, the most powerful—and deadly—of all, and she is working with Klea to conquer and destroy Avalon. With Tamani, David, and Chelsea by her side, Laurel prepares for a fight she never thought she would have to face. Filled with heart-pounding action, sweeping romance, and higher stakes at every turn, Destined is the series conclusion that readers have been clamoring for—with a twist that will leave them breathless. Tamani looked at her gravely, and reached up to touch her hair behind her ear. He hesitated for an instant, then his hands found the sides of her face, pulling her to him. He didn't kiss her, just held her face to his, their foreheads resting together, their noses almost touching. She hated how much it felt like good-bye. The Cover:  I am such a fan of these cover
Read more

Sweet Venom By Tara Lynn Childs Published by Katherine Tegen Books Published on September 2011 Summary taken from Goodreads : Grace just moved to San Francisco and is excited to start over at a new school. The change is full of fresh possibilities, but it’s also a tiny bit scary. It gets scarier when a minotaur walks in the door. And even more shocking when a girl who looks just like her shows up to fight the monster. Gretchen is tired of monsters pulling her out into the wee hours, especially on a school night, but what can she do? Sending the minotaur back to his bleak home is just another notch on her combat belt. She never expected to run into this girl who could be her double, though. Greer has her life pretty well put together, thank you very much. But that all tilts sideways when two girls who look eerily like her appear on her doorstep and claim they're triplets, supernatural descendants of some hideous creature from Greek myth,
Read more
More posts